The Mazhya Navryachi Bayko couple is seen in the historical drama, along with Mrinmayee Godbole and Lalit Prabhakar. 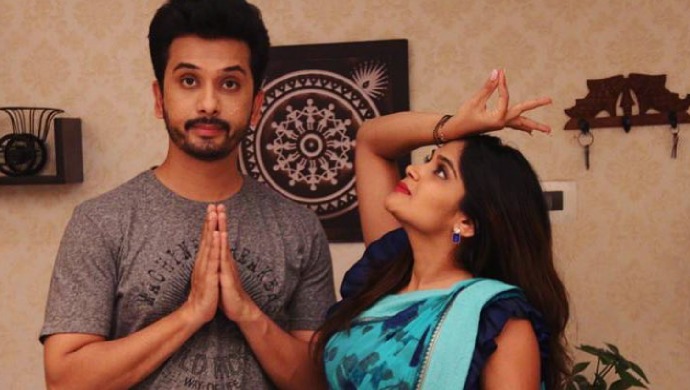 We bet you might have caught yourself laughing at Shanaya and Gurunath’s antics while hating their guts simultaneously. These actors, Isha Keskar and Abhijeet Khandkekar on Mazhya Navryachi Bayko, have stolen audience’s attention with their comic timing and onscreen chemistry. Now, stepping out of their TV roles, the duo ‘royally’ surprised us in the new avatars for the historical play, Pati Gele Ga Kathewadi.

The drama, Pati Gele Ga Kathewadi focuses on the relationship of Sarjerao Shinde (played by Abhijeet) and his wife, Janaki. While the proud Sarjerao Shinde is away on his voyages, Janaki promises her loyalty towards him. But, hilarity ensues when the evil, Joravar Singh attempts to break this oath by seducing her.  In this historical comedy, we also see the Chi Va Chi Sau Ka’s couple Mrinmayee Godbole and Lalit Prabhakar alongside Abhijeet and Isha.

Taking a break from the western attire, the Mazhya Navryachi Bayko couple will be in the traditional kingly garb. Meanwhile, Isha is seen donning a nauvari in Pati Gela Ga Kathewadi much unlike her role in the Marathi TV show.

What are your thoughts on this makeover? We would love to know your opinon.

Gondya Ala Re: 5 Facts You Need To Know About Damodar Chapekar, Played By Bhushan Pradhan