The film is directed by Ravi Jadhav and features Abhinay Berde and Kashmira Pardeshi in lead roles. More details inside! 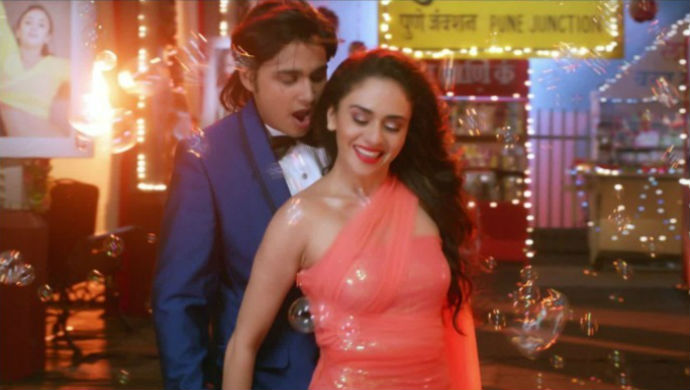 If you have noticed the trend carefully, films based on the entertainment business mostly feature some real stars. Madhur Bhandarkar’s Fashion and  Zoya Akhtar’s Luck By Chance, are some classic examples. In these films, you have seen actors playing their true identities, to support the story. Such is the case with Ravi Jadhav’s Rampaat as well. Starring Abhinay Berde and Kashmira Pardeshi, this film talks about two youngsters Mithun and Munni, that leave their small towns and come to Mumbai, to become actors.

In case you missed it, this film features stars like Mithun Chakroborty, Sai Tamhankar, Amruta Khanvilkar, and the badshah of Bollywood, Shah Rukh Khan! Confused? Well those of you who haven’t seen the film, now know what to expect. But those of you who have, are probably wondering about what we are referring to. Don’t worry folks, it’s not like you missed them in the film altogether, because they weren’t there and we’re just pulling your leg. But these stars were mentioned repeatedly in the film so technically, they were a part of Rampaat’s story!

Let us break it down for you; for starters, Mithun’s entire character is based on the Bollywood star Mithun Chakroborty. He borrows his name, looks as well as characteristics from the actor, as he idolises him. Then in one scene where Mithun and Munni participate in auditions, they come across a casting director duo that drops names like Sai, Amruta, Nagraj Manjule and Rampaat maker Ravi too! One of them picks up their phone and pretends to be talking to Sai, just to make it look like he’s big in the business.

But speaking of Amruta, she actually does make an appearance in one song from the film. Here, Mithun is dreaming of the beauty and how one day he would dance with her.

Now coming to Shah Rukh Khan. No, he wasn’t physically present in the film but throughout the story, Mithun keeps referring to the superstar, saying one day he will rule Mumbai like him. There’s a scene where Mithun stands near the sea and reminds Munni that it was at this spot that Shah Rukh Khan swore that he would become a superstar one day.

Now you know what we mean? Watch the film above and pay attention to these references in the film. Tell us who is your favourite actor in the comments section below! For more entertainment, check out the collection of fun Marathi films on ZEE5 here.

Gulabjaam: Every Foodie Will Relate To These 5 Qualities From The Heart-Warming Film!