The film is directed by Amol Shetge and also stars Ajinkya Deo and Tushar Dalvi. Read the review inside! 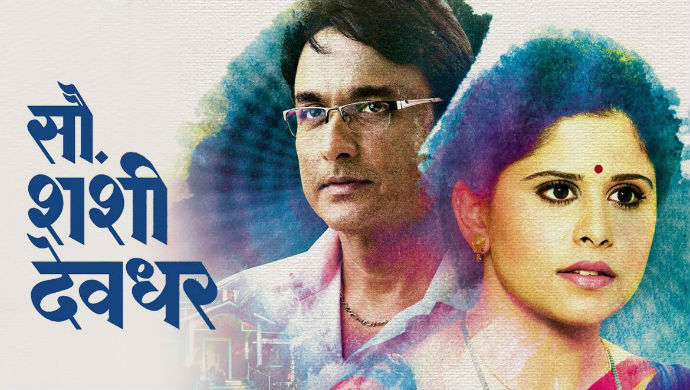 Imagine if you wake up one morning and nothing is at it was- you can’t find your family, you are in the wrong house and you don’t even know your real name. Can you fathom how scary must that be? We get introduced to this scary ans twisted world, thanks to Sau Shashi Deodhar. The film directed by Amol Shetge features Sai Tamhankar, Ajinkya Deo and Tushar Dalvi and tells the story of Shubhada (Sai), who meets with an accident and upon getting discharged from the hospital, finds that her world is upside down. She can’t find her husband and daughter, and is being constantly told that she isn’t who she thinks she is.

Things get murkier when a strange man claims that he’s Shubhada’s husband but the latter denies it. What follows is a thrilling journey where Shubhada is trying to discover the truth but soon is at a wit’s end. She is helped by a kind man, Ajinkya (Ajinkya Deo) and the two come to terms with a shocking reality that has shaped her world. Sai is riveting as Shubhada, who throughout the film, is trying to convince people that she’s the wife of a certain Shashi Deodhar.

The actress is required to be vulnerable and impatient, since her character is looking for answers to confusing questions. Sai plays the part perfectly and is convincing with her gripping act. Watch out for the scene where she talks to a stranger and says “Atta tu mala irritate karte hai (now you’re irritating me).”

Her co-star Deo stands his ground as a calm and understanding gentleman, who is helping a disturbed Shubhada. The actor brings in balance in an exciting narrative and leaves a lasting impression. Atul doesn’t have a meaty role but still does justice to his character, which despite not having much screen time, is still crucial to the story.

What makes Sau Shashi Deodhar a mind-blowing film is it’s story. It’s full of plot twists, that will keep you on the edge of your seat, and let’s leave it at that. One little detail and we might ruin it for you, so better to be safe! Shubhada’s story unfolds in layers and the truth only gets more unbelievable. By the time you reach the end, you are so invested in her reality that you can’t help but empathize with her.

Usually with thrillers, there’s a risk of losing the plot but with Sau Shashi Deodhar, the story is consistent and engaging. The best part about the film is its tragic end. But don’t worry, despite being an intense film, there’s a happily-ever-after involved.

Don’t miss this film, as it’s an ideal weekend watch that will help you forget your worries. Post your thoughts about the film in the comments section below!

Like Murder Mysteries? Watch Ashok Saraf And Shivaji Satam In Me Shivaji Park On ZEE5!