Check out our review of this fantasy thriller, also starring Sharad Kelkar and Rujuta Deshpande. 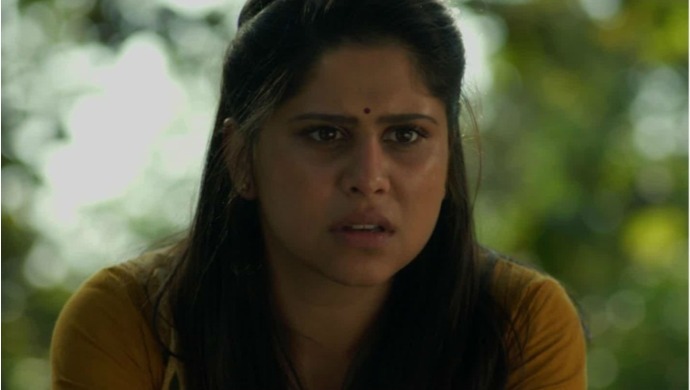 Supernatural elements are not a common sight in Marathi films. Hence before we get into the details of Raakshas, here’s a pat on the back for director Dnyanesh Zoting for even attempting his hand at magical realism. His film starring Sai Tamhankar and Sharad Kelkar, is probably the first one in Marathi cinema, that explores the genre of fantasy. Raakshas tells the story of a documentary filmmaker Avinash (Sharad)- investigating the riots by tribals in a forest- who mysteriously disappears while working on his project.

His wife Iravati ( Sai) and daughter Aru (Rujuta Deshpande) then set out on a mission to find him. As the two go deeper into the details, the lines between reality and fantasy start blurring. We are slowly made to see a magical world of folks tales, ghosts, spirits and what helps provide gravity to the narrative is the brilliant camerawork. But we’ll get to that in a bit. While Iravati uses conventional methods to find her husband, Aru chooses another route, that too on her own.

She remembers a book that she had found in the forest, when she had visited once with her father. Aru reads it in detail and comes across a fairy tale which talks about how a princess loses her father to a monster and gets him back by solving a bunch of riddles. Aru relates the story to her own reality and decides to explore it further. She comes across a man in the forest, who tells her how to solve the riddles and even helps her with some clues. The child artist shares screen space with an established actress like Sai, and yet, doesn’t lose her ground. She demands attention with her powerful act and is convincing as the vulnerable daughter, desperate to find her father.

Sai’s character Iravati on the other hand sets on her own path of finding the truth. She discovers the violence and corruption that plagues forests where corporate companies are robbing tribal groups off their lands for their own greed. The actress is equally convincing in her role and does justice to her character.

Coming to the technical aspect of the film, it is thoroughly on point. The most fascinating part about Raakshas is its stunning visual affects and efficient camera work. We see a magical world through Dnyanesh’s lens and that makes for a memorable experience. What also makes Raakshas stand out is how it uses magical realism to shed light on a grave social issue. The film cleverly depicts corporate greed ruining the livelihood of tribals and depriving them off their basic human rights. The monster that exists in the jungle is symbolic of corporate companies creating havoc for minority groups, dwelling in forests.

Sharad’s role as Avinash is limited but the actor still manages to leave a lasting impression. It is a pleasure to see him on the big screen again. And we hope we get to see him more often. Overall, Raakshas impresses with its attempt at thrilling viewers with a unique storyline, that includes fantasy. If you like fairy tales and are a sucker for this film, then this Dnyanesh directional won’t disappoint.

Watch the whole film above and tell us what you think in the comments section below. For more entertainment, check out the collection of fun Marathi films on ZEE5 here.