Mangalsutra features Alka Kabul in the lead role as Vasudha, whose life turns upside down when her husband is falsely accused of murder. 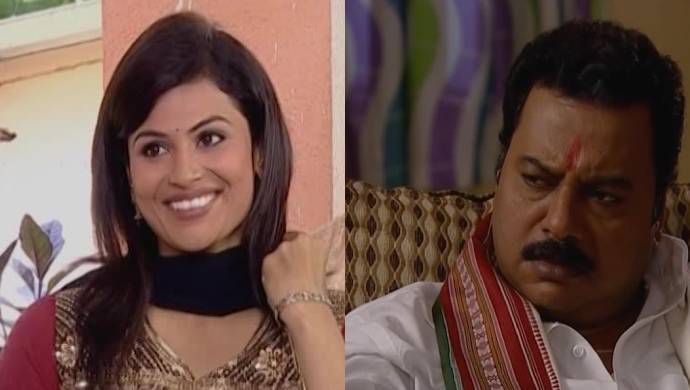 Marathi show Mangalsutra tells the tale of a couple who are dealt a bad hand at life. Vasudha and Narayan lead a happy and content life until their landlord falsely accuses the latter of committing murder. Vasudha moves to Mumbai with her children and brings them up in the city while Narayan is imprisoned. She has to look out for her three children, their father, and also manage the finances. Her character is intriguing and her journey is what makes the show worth a watch. But aside from her, it’s also the supporting characters that help shape the show’s gripping narrative.

Watch an episode of Mangalsutra here.

Vasudha’s elder son Shekhar is besotted with a girl named Nisha. He tries to woo her and succeeds in doing so. Nisha likes Shekhar too and she even asks for Vasudha’s help in setting up a lunch for her beloved. After Nisha enters Shekhar’s life, he becomes a little distant from Vasudha and his siblings. He also starts making plans for just the two of them. As Nisha’s parents are conservative, they are on a look-out for a perfect and worthy groom for their daughter. But Nisha rejects Arjun, who is chosen by her parents. She also tries to bring Shekhar closer to Vasudha and Sameer and helps the family in every possible way. Despite being a supporting character, Nisha is an integral part of the story as she’s the thread that binds Vasudha and her children together. Nisha is a third party that indirectly helps solve Vasudha’s family issues and that’s what makes the character so interesting to watch.

On the other hand, Mandar is a boy whom Sampada (Vasudha’s daughter) likes. Mandar’s parents, especially his mother, are also searching for a suitable girl for him. But Mandar’s friendship with Sampada -a girl with an unknown background- makes them suspicious. Vasudha gives Mandar a detailed insight into her troubled life and yet, he doesn’t let go of her. However, in the course of their relationship, they have a small tussle which has a bad impact on Sampada, thus effecting Vasudha. But the creases are smoothened pretty quickly. Mandar is the epitome of what we call unconditional love and adds mush and romance to an otherwise serious plot. He helps keep Sampada grounded and centered. In many ways, Mandar contributes not only to Sampada’s life but Vasudha’s too.

Nagesh is the goon who tries to harass Sampada and is beaten up by Sameer. But Nagesh has a thirst for revenge and breaks into Vasudha’s canteen to rob her. He has a brawl with Sameer who is present there. The latter is injured badly and almost loses his life. However, Vasudha’s prayer helps in his recovery. But Nagesh unintentionally teaches Sameer an important lesson about anger management. Eventually, Sameer and Vasudha withdraw the police complaint filed against the goon. Nagesh and Sameer help keep the drama alive in the narrative. Their constant fights keep viewers at the edge of their seats and bring in the thrill that makes the narrative so engaging.

Another person who affects Vasudha and turns her world upside down is her landlord, Patil. He is jealous of Narayan and his social standing and as a result, falsely accuses Narayan of committing murder and sends him to prison. He is the reason Vasudha has to flee from their village and settle in an unknown city with her three little children. But as they say, what doesn’t kill you makes you stronger. Therefore, Patil helped her find herself and become the woman she never thought she could be.

5 Reasons Why You Need To Watch Sindhu On ZEE5