Read our review of this heartwarming film directed by Sudhakar Reddy Yakkanti. 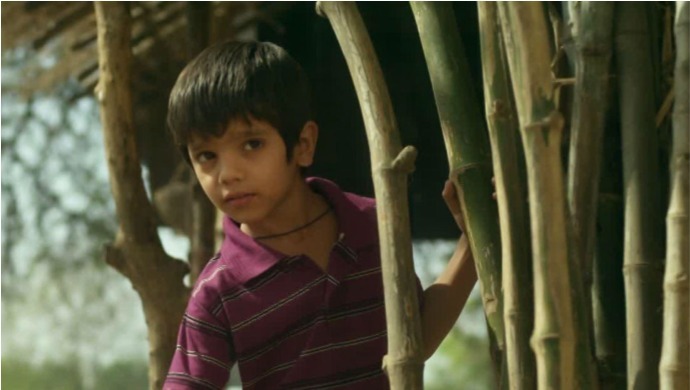 If you think a child is necessarily attached to a woman that has given birth to him/ her,  Naal will alter your thinking,  possibly for the better. This Sudhakar Reddy Yakkanti directional starring Shrinivas Pokale and Nagraj Manjule, tells the story of a small boy Chaitya,  who discovers that his birth mother is someone else and not the woman he has spent nine years of his life with. Chaitya is shook with this reality and devices ways to meet his real mother. From deliberately hurting his grandmother to running away from home repeatedly,  the little boy does it all to achieve his mission.
Watch the film here.
The most striking factor about Naal is the story. One is reminded that motherhood has nothing to do with a child being borne by a woman’s womb. It’s the care and love that she provides that makes her a mother in his/ her eyes. After discovering the truth about his real mother,  Chaitya starts acting out. He distances himself from his own mother (played by Devika Daftardar) which worries her. She is unable to put a finger on why her son is acting aloof.  In the beginning of the film,  we are given a lowdown into the strong bond that Chaitya shares with his mother. But a hidden truth completely changes their equation and we are then taken on a journey of how Chaitya realises the value that his current mother brings into his life.

There are some heartfelt scenes in the film.  In one of them,  Chaitya forces a calf into his grandmother’s body,  to knock her off the chair and hurt her.  He does this so that she gets injured and taken to her relative’s place,  where Chaitya’s birth mother also resides. That way,  he can travel with his granny to meet his mother.  Though Chaitya successfully harms his grandmother,  he is sick with guilt when the calf dies. Though the animal passes away due to electrocution,  Chaitya thinks it’s his deed that killed her.

There are umpteen scenes where you empathise with Chaitya and the turmoil that he is going through.  He throws temper tantrums and howls when he doesn’t have his way. And yet,  all you feel is sadness for the little kid,  given his complicated family situation.
Shrinivas is out and out, the star of the film. It’s remarkable that an actor as young as him can make his work look so experienced. Shrinivas’s act is ridden with innocence and vulnerability, which is captivating. Devika too shines as Chaitya’s mother and delivers,  especially in emotional scenes. Nagraj as Chaitya’s father proves yet again that he is skilled both as a director and actor. A special shoutout to the grandmother,  whose eccentricity keeps the humour alive. Her character reminds us a little of the old woman in Peepli Live.
The ending of Naal is the best part. Chaitya finally comes in contact with his birth mother but is shattered when she ignores him. She heads back home and he runs after her, trying to grab her attention. But the boy breaks down,  thinking that his real mother doesn’t love him. Cut to, we see the woman stifling her sobs as she moves further away from her son.
Naal is filled with such emotional scenes that will have you reaching for the tissues. Kudos to Sudhakar for capturing a mother-son bond so beautifully and reminding viewers that mothers truly are superheroes without a cape.
Watch the film above and tell us what you think about it in the comments section below.  For more entertainment, check out the collection of fun Marathi films on ZEE5 here.