It's time for you to choose between Isha Keskar and Apurva Nemlekar. Cast your vote inside! 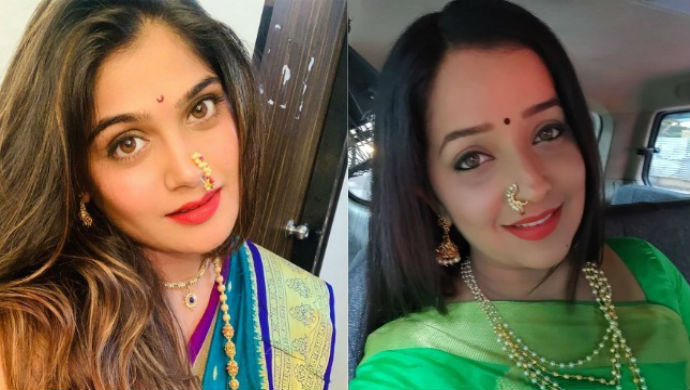 When a particular fad sets in the entertainment industry, most actresses make it a point to sport and flaunt it. From white sneakers to crop tops to shimmery gowns, a lot of various fashion trends and have come and gone. However there are some that have been carrying on since ages and aren’t likely to go out-of-fashion anytime soon. An example if that of naths. Marathi actresses often wear these with traditional attires as it is one piece of jewelry that defines their identity as a ‘Marathi mulgi.’ Recently, we saw Mazhya Navryachi Bayko’s Isha Keskar and Ratris Khel Chale 2’s Apurva Nemlekar, rocking traditional naths with their desi outfits.

The actresses are seen as Shanaya and Shevanta in their respective Zee Marathi shows. Isha sported a traditional pearl and red stone nath, along with her bright blue saree. The light-eyed beauty looked gorgeous as she finished her look with matching jewelry and bright red lips. Check out her picture here.

Apurva on the other hand wore a half-moon shaped golden nath along with her parrot green saree. She finished her look with a pearl necklace and a pair of matching earrings, light red lips and a black bindi. Check out her look here.

Car selfie is a must 🙈🙊 hahaha

A post shared by Apurva Nemlekar (@apurvanemlekarofficial) on Sep 5, 2019 at 6:58am PDT

Both the actresses look stunning in their traditional attires. But the question is, who looks better? Whose nath did you like more? Tell us in the poll below!

Whose Nath Do You Like More?
Stay tuned for the results and keep watching this space for more updates! Catch all the episodes of Mazhya Navryachi Bayko, streaming on ZEE5.