In Mazhya Navryachi Bayko, Shanaya is left humiliated after her plan to do the aarti fails. 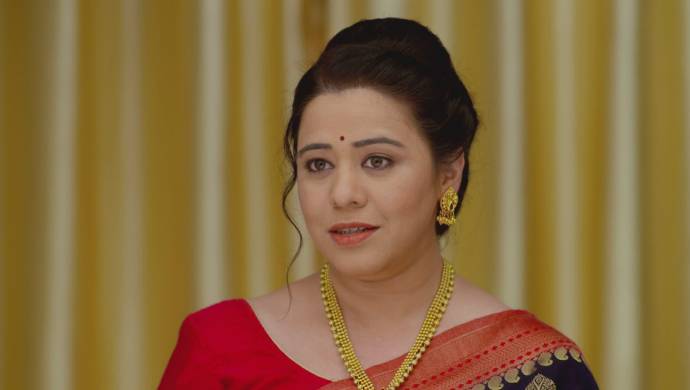 In the recent episode of Mazhya Navryachi Bayko, Radhika is preparing for Ganpati Bappa’s aarti. She tells Mahajani Kaka to do it but Shanaya enters and wants to do the aarti. As the majority of people support Shanaya, she does the aarti. But, before Shanaya can start it, Radhika narrates a story which convinces everyone that Nana and Nani should do the aarti. Everyone is happy hearing Radhika’s story which irritates Gurunath and Shanaya more.

Shanaya and Gurunath come home angrily and he tries to instigate her against Radhika. Shanaya promises to beat Radhika during the cultural programme in Gulmohar society. After the aarti, Radhika’s supporters are tired of Shanaya’s behaviour. They are discussing ways to throw Shanaya out of the building. Radhika remains calm and tries to pacify them.

Radhika says that she is too busy to entertain Shanaya’s tactics. During this, Saumitra enters and cheers for Radhika. They go to Anand and Jenny’s house for Ganapati Bappa’s darshan. There, Radhika can’t stop feeling bad about her stolen file. As she starts feeling bad, a new idea strikes her. Radhika tells Anand that they could request the clients to send the copy of documents.

The Film 'Timepass' Shows Young Love Amid The Caste Differences