Shanaya lands Gurunath in major trouble. Will he be able to find a way? 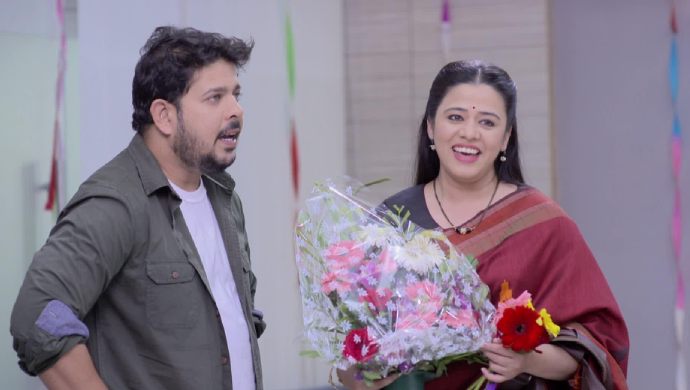 The ladies of Gulmohar society come to congratulate Radhika in the recent episode of Mazhya Navryachi Bayko. Mahajani Kaku gets a box of sweets and distributes it to everyone. Shanaya, who is making tea in the kitchen, overhears their conversation and knows Radhika is being honoured for her work. She takes the cup of tea to Gurunath who is happy seeing this gesture. Gurunath doesn’t know yet that Shanaya has taken all the money from the bag. She acts sweetly and thinks of spending the cash after reaching her mom’s place. Gurunath suggests her to ask Radhika and Aai’s permission before going to meet her mother.

Shanaya asks Aai and Radhika to let her go to visit Mrs Sabnis. She lies to everyone in the house saying her mom is ill. Radhika says she can only go if she finishes all the household chores. Shanaya tells her that she has already finished it and asks Gurunath to drop her on his way to office. Aai tells Gurunath the good news about Radhika. But, Gurunath leaves without congratulating Radhika. As Gurunath reaches office with client’s bag, he is appreciated for his honesty. On opening the bag, the client finds no money and Gurunath is blamed for the robbery. He is surprised as he doesn’t know where the money has disappeared. On the other hand, Shanaya gives her mother the amount she stole from Guurnath’s bag and Kedya overhears their conversation from the bathroom. He suspects Shanaya’s actions. Mrs Sabnis gives Shanaya Rs 10,000 while keeping the remainder with her.

At Gurunath’s office, his malak screams at him for stealing the money from the bag. The client is ready to let go of this incident but the malak threatens Gurunath that he has to find the money or leave his job. He accepts the conditions and assures him and the client that he will arrange for the money within a day. At Radhika Masale, Radhika’s colleagues welcome her with gifts and celebrate her success. Gurunath urgently calls Kedya and asks to lend him fifty thousand rupees. Kedya tells Gurunath that even he is poor and discusses with Gurunath about Shanaya having a lot of money. Gurunath wonders how Shanaya got the cash and suspects her of stealing it. He, along with Kedya, decide to meet Shanaya but the latter tells Gurunath that she must have already spent all the cash.

If you have enough of romance for the day after watching this show, tune into Anushka Sharma’s superhit thriller NH10 streaming on ZEE5.

Planning To Work On A Play? Take These 6 Tips From Sex Drugs & Theatre