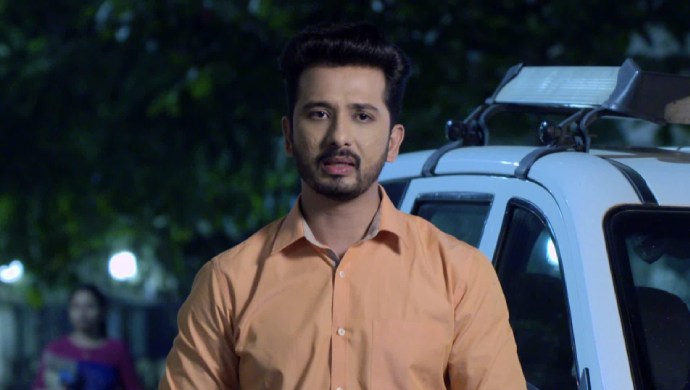 In the latest episode of Mazhya Navryachi Bayko, Gurunath’s malak tells him over the phone that a rich client has booked their car for a day. Gurunath is supposed to treat him well and there shouldn’t be any complaints from the client’s side. Shanaya overhears this and asks him to give her money to treat her friends. He tells her it is difficult to collect money and asks her for some time. Then, Shanaya walks out.

At Radhika Masale, Anand announces that they have finally collected Rs 10 crore in the Shetkari Fund. Radhika’s colleagues cheer for her. Then, Anand says Shethkari Kalyan Sanstha wants to honour Radhika after hearing this news. Meanwhile, Shanaya goes to her mom’s house complaining about how boring her life is. She is sad that she lost against Radhika and embarrassed herself. In this mood, Shanaya also confesses that she loves Gurunath. Her mom, Mrs Sabnis says you shouldn’t love people, you should love money. During this conversation, Kedya enters the house covering his face by wearing a mask. He is hiding because people are running behind him for money.

Gurunath’s malak introduces him to the rich client who recognises him from the past when Gurunath was the CEO of the company. He asks Gurunath what happened that made him become a driver. Gurunath tells destiny took a toll on his luck. Meanwhile, from Revati’s house, Mahajani Kaka updates Radhika about Revati and Subodh’s fight that happened over Neha’s tiffin. He tells that Mahajani Kaku has to fake her act of collapsing just to calm them down. On the other hand, Shanaya’s mom forces her to go back home. She wants Shanaya to get her hands on Radhika’s property.

Gurunath’s client is happy with the service he provided and offers him a job. But, Gurunath thanks him and politely declines the offer as he leaves to come home. At home, Radhika comes with a box of sweets and tells Aai about the good news. Shanaya who enters after her is taunted by Aai and Radhika for being out of the house the entire day. She back answers them and they ask her to cut vegetables. Meanwhile, after parking the car, Gurunath realises the client has left his bag in the backseat of the car. On opening the bag, he finds a huge amount of cash. After informing his malak about this situation, he is told to keep the bag and get it tomorrow. At home, Shanaya bombards him complaints against Radhika and taunts him for having less money. He gets frustrated and goes to freshen up. Shanaya opens his client’s bag and takes the money thinking it is Gurunath’s.

What do you think Shanaya will do with it? Let us know your thoughts in the comments below.

If you have loved watching their romance, then, check out the love story of Phulpakhru streaming free on ZEE5.