In Mazhya Navryachi Bayko, Aai lies to Gurunath about Radhika Masale as Baba and Radhika feel bad after hearing this. 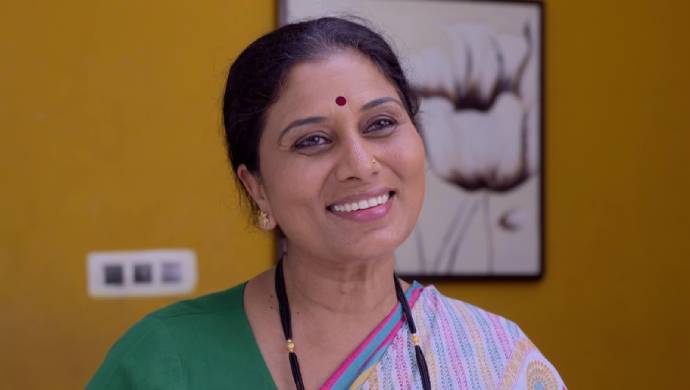 In the recent episode of Mazhya Navryachi Bayko, Mrs Sabnis and Kedya are planning to meet Gurunath. Kedya decides to confront him with the help of Atharva. They call Radhika as Atharva answers, Kedya tells him that he has won a price in ‘Kids Bonanza’. Atharva gets lured by this offer and asks Gurunath and Radhika to accompany him to the supermarket. Radhika, who has to go to the office, is reluctant but Aai and Gurunath force her to go with Atharva.

At Radhika Masale, the important meeting that Radhika has to attend begins without her. The client is expecting her but she is gone shopping with Atharva. The client is highly disappointed by Radhika’s absence as they make their feelings apparent and walk out. Radhika’s colleagues try to explain to them the situation, but they aren’t in a mood to listen.

Shanaya and Mrs Sabnis are worried about Kedya’s plan. As Shanaya calls Kedya to check with him, Gurunath appears along with Radhika and Atharva.  After reaching this supermarket, they realise there isn’t any offer as Gurunath steps out. Kedya confronts Gurunath and tries to remind him of the past as this irritates the latter. Gurunath beats Kedya up as Radhika intervenes.

During this fiasco, Radhika gets a call from Jenny, but Gurunath answers. Jenny starts talking about the client as Gurunath gets a doubt and understands about Radhika Masale. As Gurunath starts asking questions about Radhika Masale, Aai lies to him and makes up a story around Radhika’s company. Baba and Radhika are deeply hurt after hearing these lies.

What do you think will happen in the upcoming week? Let us know your thoughts in the comments below.

For more entertainment, check out the action-packed drama Sonchiriya streaming on ZEE5.