Mazhya Navryachi Bayko 7 November 2019 Written Update: Radhika In A Fix Because Of Shanaya

In tonight's episode, Shanaya joins hands with Urmila Mhatre to find proof against Radhika and put the blame on her. 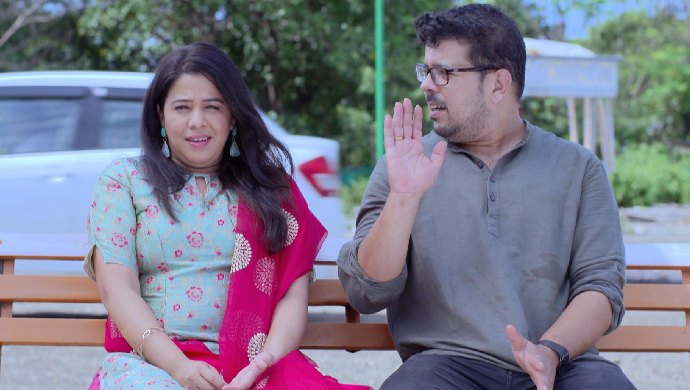 In the recent episode of Mazhya Navryachi Bayko, the police constable asks Radhika’s driver to open the car as he wants to search for evidence. While doing so, he discovers a bottle of poison near the front seat. The constable tells his senior about it in front of Radhika. An informer tells Urmila Mhatra about the police finding the bottle in Radhika’s office. She calls Radhika and demands money from her to keep mum.

In tonight’s episode, Gurunath feels bad for Radhika when he sees the news about the police finding a poison bottle in her car. Shanaya gets an idea to find more evidence against Radhika and put the blame on her. The latter oppose her decision but Shanaya refuses to listen to him.

Later, Shanaya goes to meet Urmila Mhatre and tells her that she has come to discuss a deal. She tells Urmila that if Radhika is found guilty then she will take over Radhika Masale and also provide funding to her party. Hearing this, Urmila Mhatre gets surprised and joins hands with Shanaya. But she also warns the latter that finding proof against Radhika won’t be an easy task. Shanaya tells her the plan and asks her to do as she says without asking questions.

Later that day, Soumitra’s mother asks him to be with Radhika as she going through a rough phase. The latter then takes Radhika for a long drive. A few moments later, Saumitra goes to get ice cream and in the meantime, a group of people surround Radhika and start blaming her for the incident. We see Urmila Mhatre watching this from a distance and it is revealed that she had sent the ladies to torture Radhika. Saumitra comes there and asks everyone to step back.

Watch Vazandar, The Journey Of Two Girls On A Mission To Loose Weight!