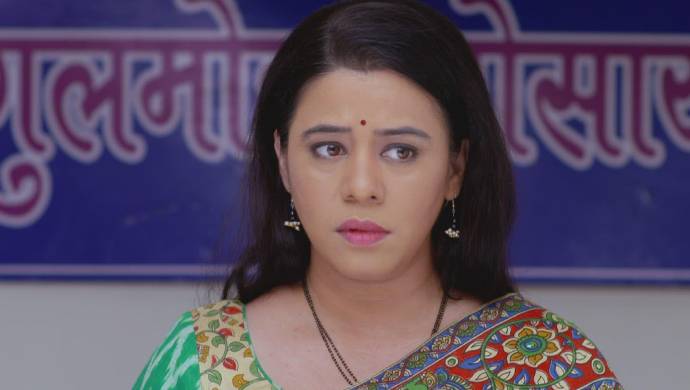 In the recent episode of Mazhya Navryachi Bayko, the people of Gulmohar society are in tension. Radhika comes home from the office and finds everyone waiting for Aai. During this, Aai enters and everyone comes to know that she had gone to Gurunath and Shanaya’s house. Baba scolds and humiliates Aai for going behind his back. Aai defends herself saying that she went out of goodwill. They explain to Aai that Shanaya and Gurunath found her weak spot and exploited it. Baba gets so irritated that he wants to throw Aai out of the house. She starts crying and is hurt by Baba’s accusations.

Shanaya and Gurunath eavesdrop the conversation between Aai and Baba. She is happy that Aai was embarrassed in front of everyone and she gets the satisfaction. During her conversation with Gurunath, he subtly motivates her to take over Radhika’s company and make it in her name. After Shanaya leaves, Gurunath is set to take revenge on Radhika with Shanaya’s help.

At the Subhedar house, Radhika is trying to calm Aai down. Aai is devasted as she thinks Baba distrusts her. She feels no one believes ger good-willed motivations and everyone has made her look like a culprit. Radhika understands her side and supports her in front of Baba. Then, Aai assures him that she won’t repeat her mistakes and ignore Shanaya and Gurunath.

The following day, Shanaya is invited to the society meeting. She goes with the purpose of fighting with Radhika who is leading the meeting. Radhika suggests that they help the people whose lives have turned around due to floods. This gets Radhika pulled in the controversy.