For his next move, Gurunath pretends to feel guilty and begs for forgiveness from Radhika. But will she? 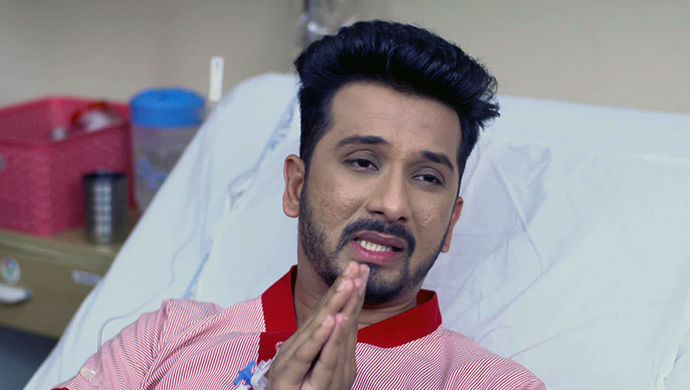 In the last episode of Mazhya Navryachi Bayko, we saw Shanaya getting upset and deciding to leave Gurunath when she discovers that he sent flowers for Radhika. He confesses and tells her that he only did so to make Soumitra’s feelings for Radhika evident. When he goes home, he is yelled at by Radhika, who gives him an earful for taking advantage of her and Soumitra. She decides that there can be nothing more between her and Soumitra. Later, Shanaya tells her mother that she suspects that Gurunath is cheating on her and comes home to teach him a lesson.

Meanwhile, Anand reprimands Soumitra but the latter tells him the whole scenario with Gurunath. Anand says that Gurunath has lied to him. Soumitra aplogises to Radhika for hurting her. Anand yells at Gurunath but the latter pushes the blame off him. The donations for farmers’ association are in and since Anand is busy, Gurunath offers to handle them but is disappointed when he is denied the opportunity.

In tonight’s episode, we saw Shanaya deciding to teach Gurunath a lesson and sends him a text which reads that she has left him and won’t ever return. An upset Gurunath calls her but she cuts the call and he decides to deal with her later and first solve the crisis at hand with Radhika. Back home, Radhika is upset and is crying when Baba approaches her and asks what is wrong. She refuses to tell him and he leaves her by saying that she shouldn’t be tolerating injustice at any cost.

At the office, Rane comes to visit Anand. The latter completes the formalities and acquires the cash from him. Anand notices Gurunath eyeing the suitcase filled with money and asks him what the matter is. Gurunath masks his greed by saying that a hefty amount as such should be kept safely. Anand tells him not to worry and that he will handle it. Gurunath secretly gets happy thinking that all that money is going to be his, very soon.

He is able to spot the place where the money is kept safely. Back at her mother’s place, Shanaya gets restless seeing that Gurunath hasn’t called her. Her mother assures her that he must be having a plan in place and that he will come home soon.

Meanwhile, Gurunath apologises to Anand and tries to win back his trust. Anan, however,r hears none of it and Gurunath says that he will make everything right by talking to Radhika and Soumitra. But Anand is still upset and walks off.

The episode ends with Gurunath pleading for forgiveness from Radhika and revealing to her that everyone already knew Soumitra’s feelings towards her.

How will she react? And what will Gurunath’s next move be? Stay tuned to find out!

Catch all the episodes of Mazhya Navryachi Baiko, exclusively on ZEE5.

If You Are A Sucker For Thrillers, Don't Miss Subodh Bhave And Gayatri Datar's Tula Pahate Re!

Aamir Khan And Kiran Rao's Toofan Aalaya Is Coming Back With A New Season - Watch Promo!