In Mazhya Navryachi Bayko, Radhika gets a woman's photo to show Saumitra. She wants to get them married. 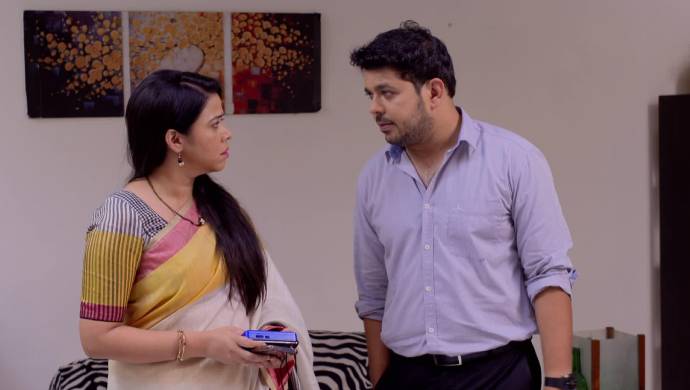 In the recent episode of Mazhya Navryachi Bayko, Shanaya and Mrs Sabnis don’t pay the food stall owner and run away. He follows them while Shanaya and  Mrs Sabnis get separated. Shanaya bumps into Gurunath asks him to help her hide. Gurunath agrees. Shanaya apologises to Gurunath for treating him badly. He tells her that she was nice to him only when he had money in his pocket. Gurunath then goes away.

Saumitra comes to the Subhedar house to meet Radhika who is in the bedroom. Baba, who is teasing him and Radhika, asks him if he has proposed to Radhika yet. As Saumitra is about to answer, Radhika enters and interrupts their conversation. Baba leaves them alone and Radhika tells Saumitra that she wants to speak to him in the evening.

Shanaya isn’t at home and Mrs Sabnis is worried. Popatrao asks Guruji and Mrs Sabnis about Shanaya’s whereabouts. Popatrao says Mrs Sabnis will only receive the cash when he and Shanaya get married on the next day. Shanaya and Mrs Sabnis decide to take Gurunath’s help. They try to run away from the house but Guruji stops them. Meanwhile, Radhika and Saumitra meet in the evening. He decides to propose to Radhika. But, Radhika shows him a woman’s picture for marriage. Saumitra is hurt after this gesture.