Gurunath decides to surprise Atharva with a grand gift for his birthday. Radhika's colleagues Saumitra and Anand plan a grand party. 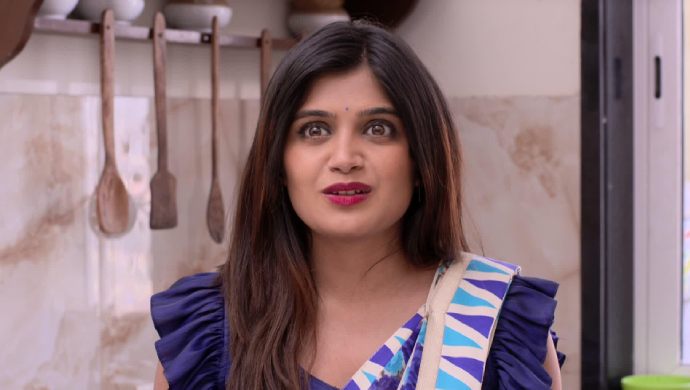 The latest episode of Mazhya Navryachi Bayko begins with Revati and Radhika going for a morning walk. They discuss the side-effects of technology- mobiles and tablets. Radhika is seen complaining to Revati about Atharva’s addiction to it. Meanwhile, Revati talks about how technology is empowering women. At home, Atharva takes Aai’s phone without telling her as she, Shanaya and Gurunath start looking for it.

Radhika and Revati catch Atharva and Neha using the phone. Radhika gets angry at him for playing on the mobile without asking Aai for permission. She takes him home and gives the mobile to Aai who is panicking searching for it. Radhika is furious at Atharva and Aai blames Shanaya for addicting him to the device. Atharva says he is the only person in his friend circle who doesn’t have a tablet so Gurunath promises him to get one, too. Aai supports Radhika which angers Gurunath. Shanaya decides to tell this argument to her mother.

At office, a company wants to collaborate with Radhika Masale to distribute tablets to farmers’ children. Radhika is against this while her colleagues are in agreement with the idea. She feels farmers need pesticides and seeds instead of fancy tablets. Shanaya and her mother discuss the argument as her mom asks her to focus on getting Radhika’s Rs 300 crore property. Anand and Saumitra find Radhika worrying about Atharva’s distraction because of technology. They try to calm her down by cracking jokes during which she remembers it is Atharva’s birthday in the next two days.

Saumitra and Anand plan a party for Atharva and they tell Radhika to just think of a gift. On the other hand, a stranger talks about his love for his son to Gurunath. After this, he decides to get Atharva a nice gift to make him happy. Radhika after reaching home from office tries to explain to him that he must always seek permission before touching anyone’s personal items. She asks Atharva what he wants for his birthday, he replies saying he wants a tablet. She flatly refuses him.

What are your thoughts on Radhika’s behaviour? Do let us know in the comments below.