In tonight's episode, Radhika plays a prank on Saumitra and Atharva but Saumitra's father falls for it. 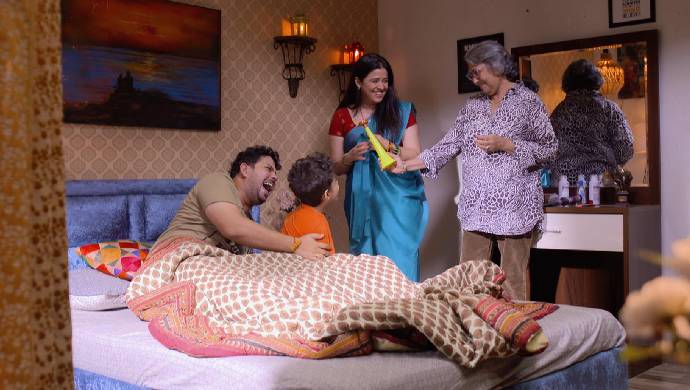 In the recent episode of Mazhya Navryachi Bayko, Aai and Baba get emotional while talking to their grandson, Atharva. Saumitra tells them that they have kept a Satyanarayan Pooja the next day, and all of them are invited. On the other hand, Mrs. Sabnis warns Gurunath to stop annoying Shanaya, or else she will leave him, just like Radhika.

In tonight’s episode, Aai calls Radhika to enquire about her and Athrava’s health. The latter says that both of them are doing great and that he is having fun with Saumitra. Later, Radhika goes to the kitchen to make breakfast, but the Saumitra’s mother asks her to concentrate on the pooja.

Radhika and Saumitra’s mother try waking up Saumitra and Atharva, but the two of them refuse to do so. Radhika decides to play a prank, using a megaphone. Hearing the loud sound, Atharva and Saumitra both wake up with a start. A few minutes later, Saumitra’s father enters the room and asks everyone to hurry up and run towards the exit, as he thinks that it was a fire alarm. When he sees the megaphone in Radhika’s hand, he realises that it was just a prank.

How Did Mazhya Navryachi Bayko’s Radhika, Shanaya Wish Gurunath On His…

Later that day, Aai, Baba, Nana-Nani and other people from Gulmohar society, Radhika Masale, come to Saumitra’s place for the Pooja. When Nana asks about Saumitra’s father’s whereabouts, the latter says that he is busy with a few business meetings, which is why he won’t be available.  On the other hand, Gurunath meets Kedya and tells him that the only person who can help him is Saumitra’s father, as he thinks only about business and nothing else.