In Mazhya Navryachi Bayko, due to Radhika's injury, Saumitra helps her to walk. 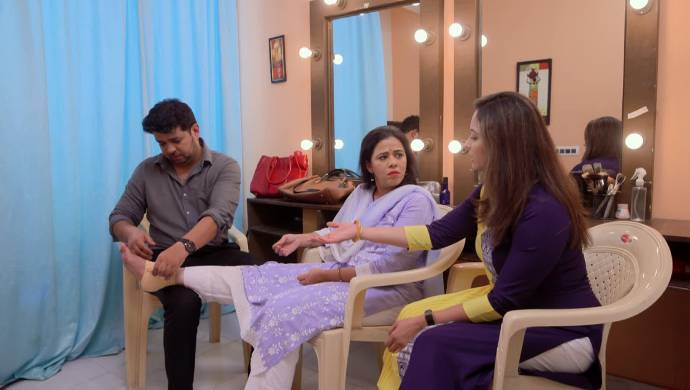 In the recent episode of Mazhya Navryachi Bayko, Saumitra encourages Radhika to take part in the dance competition. Radhika gets upset thinking he can’t empathise with her pain. But, Saumitra tells her that she is a role model for Atharva, so if she isn’t she doesn’t overcome her difficulty now, Atharva will also make reasons throughout his life. Saumitra pleads to her to show more courage in such a situation and be a part of the competition.

Popatrao goes to Shanaya asking her which wedding card she liked. Shanaya says she didn’t like any of his choices. She and Mrs Sabnis say that their weddings are usually high profile and go on for a couple of days. As Mrs Sabnis tells the wedding will cost him Rs 3-4 crore, Popatrao readily agrees. They decide to do a destination wedding and go to Paris for their honeymoon.

Saumitra, who is helping Radhika, takes her to her dance class. Revati and Saumitra are making fun of Radhika. On the other hand, Baba tells Nana and Mahajani Kaka that Saumitra hasn’t proposed to Radhika yet. He tells them about Saumitra’s attachment towards Radhika and Atharva.

At Radhika Masale, Radhika has a meeting with Rajwade Sir. Saumitra gets her inside and helps her sit Seeing their closeness, Rajwade Sir is alerted. He, then, goes to Gurunath to tell him that Radhika is distanced from him and she has already replaced him with someone else.