Gurunath plays a prank with Radhika and Anand. 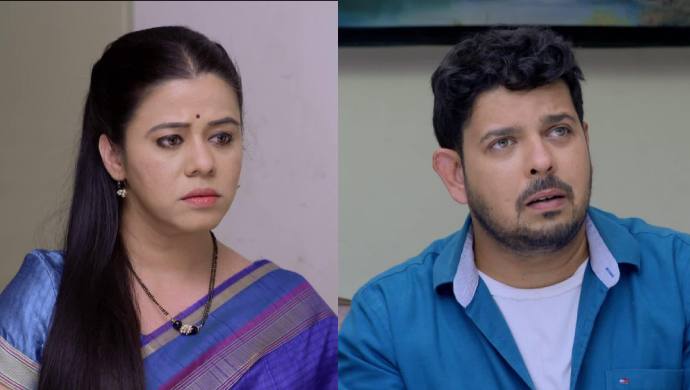 Anand and Gurunath enter together in office in Mazhya Navryachi Bayko’s recent episode. Radhika calls Anand and announces that they have collected Rs 35 crores for the farmer’s fund. After hearing this, Gurunath imagines taking this money and spending it with Shanaya. But, Gurunath tells Anand and Radhika that they should to give credit to Saumitra as he deserves it.

Saumitra goes to Revati and Subodh to ask them about Radhika’s changed behaviour. Revati reveals the true reason and talks about the rumours linking both of them. Revati promises Saumitra that she will talk to Radhika. But, being hurt, he stops Revati from going to her. However, Revati is sure she is going to hint Radhika about it.

Gurunath is taking a keen interest in Saumitra and Radhika’s life. This makes Anand suspicious. So, Gurunath justifies to him that Radhika deserves someone like Saumitra as she has been a good person. They both decide to get Radhika and Saumitra together with Gurunath’s idea.  Meanwhile, Revati confronts Radhika about Saumitra. She tells Radhika that he shouldn’t be punished because of her sudden change in behaviour.

In the next scene, Saumitra and Radhika get bouquets from each other with a letter asking them to meet at a cafe. Saumitra thinks Radhika has sent it after her and Revati’s conversation. Soon, it is revealed that Gurunath has sent it. After Radhika reaches home, Shanaya wants to know who sent her the bouquet. Meanwhile, Saumitra is so happy that he decides to propose to Radhika. Anand is worried about Gurunath’s move as it could have serious consequences. On the other hand, Shanaya sees these roses and asks Gurunath to get her a gift like this.