In tonight's episode, Gurunath and Shanaya go to see the campaign and end up wearing 'We Support Radhika' t-shirt. 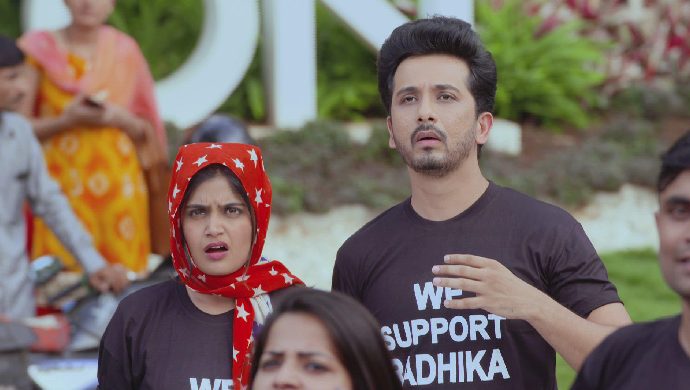 In the recent episode of Mazhya Navryachi Bayko, Saumitra comes to the police station and helps them to make the sketch of the attacker. After seeing the sketch, Raghu says that he has seen him somewhere but is unable to recollect where.  Revati gets a call from her team that We Support Radhika campaign is gaining popularity and people have started supporting Radhika. On the other hand, Urmila Mhatre informs Shanaya that Radhika’s campaign is getting popular which might create a problem.

In tonight’s episode, Urmila Mhatre calls Shanaya and tells her that people have started supporting Radhika and now they have all gathered near their building. She then tells Shanaya and Gurunath to go there and make sure that their plan fails.

Gurunath and Shanaya get surprised to see so many people supporting Radhika. They try to ask one of the crew members what is going on and end up wearing T-shirts which says we support Radhika. Urmila Mhatre gets pissed seeing the two of them wearing the t-shirts. Later, Radhika comes to meet everyone and tells them how she was falsely accused of poisoning her own employees. When she completes her speech, everyone starts applauding for her.

How Does The Cast Of Agga Bai Sasubai Spend Time On Set? 7 Pics Inside For You…

5 Heartwarming Scenes Between Dagdu And Prajakta In Timepass

Later that day, Gurunath tells Shanaya that it is very hard to prove that Radhika was guilty in front of the court. The latter feels that Gurunath is sympathetic for his ex-wife. She then tells him that Radhika will be punished because she won’t be able to get any proof within a day. On the other hand, Radhika is worried about the results because they haven’t got any proof.