Radhika, Anand and Saumitra decide that they will not believe in Gurunath. 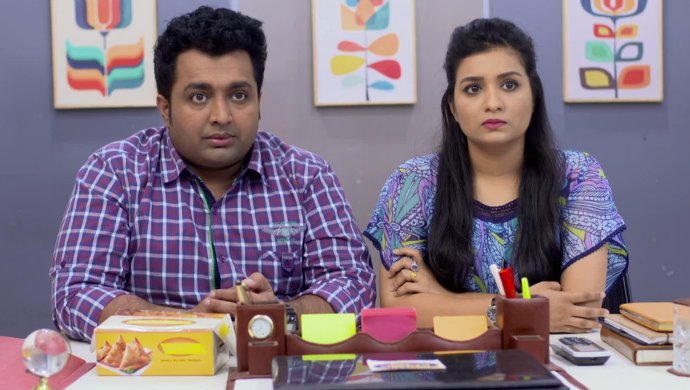 In the previous episode of Mazhya Navryachi Bayko, Gurunath joins Radhika’s office. Colleagues aren’t happy with Radhika’s decision. Radhika tries to convince people saying he can be a great resource to the company. Everyone accepts him on one term that if he works honestly for the company, he deserves a chance. But Anand doesn’t agree with this and decides to quit.

In today’s episode, we see Radhika and Jenny come out of the office to look for Anand but they don’t find him they even reach out to Saumitra but even he has no idea about his whereabouts. Gurunath calls Shanaya and tells her about how Anand reacted when he saw him. While he is speaking on the phone, Radhika asks him to cut the phone call and come to the meeting room. Radhika then warns Gurunath to not to involve himself in anything except work and she also tells him to address her as Radhika Madam. Saumitra finds Anand near a tea stall and tries to convince Anand to accept whatever has happened and tells him that he needs to react to a situation smartly unlike what he did. He also tells Anand that he is the only person who knows Gurunath very well and only he can know about his moves.

At home, Shanaya calls Mrs Sabnis and tells her about what happened in the office and how Anand reacted to this situation. After getting convinced by Saumitra, Anand returns to the office and gets scolded by Jenny for irresponsible behaviour. Radhika, Anand and Saumitra decide that they will not believe in Gurunath but give him a chance to be himself. While this happens, Radhika avoids talking to Saumitra and Saumitra observes it.

What do you think will be Gurunath’s next move? Keep watching to know more.

Watch Tamashree, A Story Of A Young, Perfectionist Woman With An Unexpected Ending

Tula Pahate Re’s Vikrant Aka Subodh Bhave Is Doing Something Special For Kiddos?