Radhika takes Gurunath back to work. Everyone at Radhika Masale refuses to work with him. 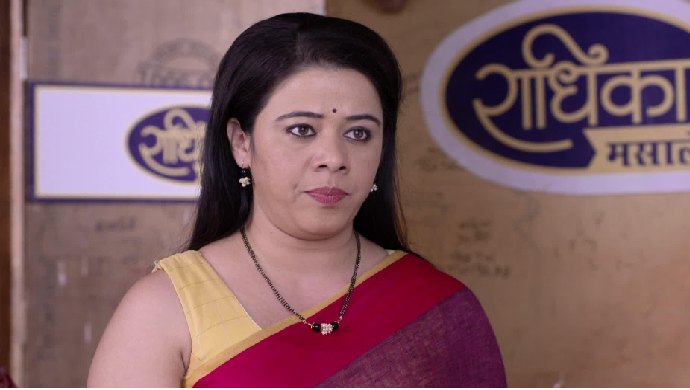 In today’s episode of Mazhya Navryachi Bayko streaming on ZEE5, Gurunath tries to fire Bakula Maushi pretending to do her part of the household chores. But, Radhika intervenes and offers him a job at Radhika Masale, again. Gurunath acts like he is too ashamed to take the job as Radhika insists him to accept it. Meanwhile, Baba and Mahajani Kaka are discussing the situation at home. During this, Mahajani Kaka informs the gossip swirling in the society about Saumitra and Radhika. Baba gets furious hearing about this and says he trusts Radhika. Baba says after the divorce of Radhika and Gurunath, he wants Radhika to get married to Saumitra as he is a good person.

Kedya blackmails Mrs Sabnis that he will tell Radhika about her if she doesn’t reveal the plan. Mrs Sabnis says it is Gurunath’s plan to steal Radhika’s Rs 300 crore property. Kedya after hearing this starts laughing. At home, Aai is celebrating that Gurunath has taken Radhika’s job offer. She hopes Gurunath and Radhika will reunite while working together. But, Baba asks her to not expect this as they both are beyond reconciliation. During this conversation, Baba says he wants Saumitra and Radhika to come together. Aai is shocked after hearing this and starts screaming. Baba says he doesn’t care what people think as Saumitra will keep Radhika happier than Gurunath. He finally shuts Aai down who is left crying.

Radhika enters the office with Gurunath. Everyone who is happy get furious after seeing Gurunath. They openly show their disapproval. After seeing this difficult situation, no one is ready to listen to Radhika. Gurunath interrupts, but Radhika says he can be a great resource to the company because of his intelligence. Anand still objects this. Everyone else says if Gurunath works honestly for the company then he deserves a chance. Finally, Anand decides to quit.

What will happen in the next episode? Let us know your thoughts in the comments below.

Watch Housewife Strive Hard For Her own Freedom On Mrs. Subbalaxhmi Exclusively on ZEE5

If You Have Someone Like Myra From Tula Pahate In Your Life, Here's How To Deal With Them