In Mazhya Navryachi Bayko, Popatrao decorates the house and dances with Shanaya on her birthday. 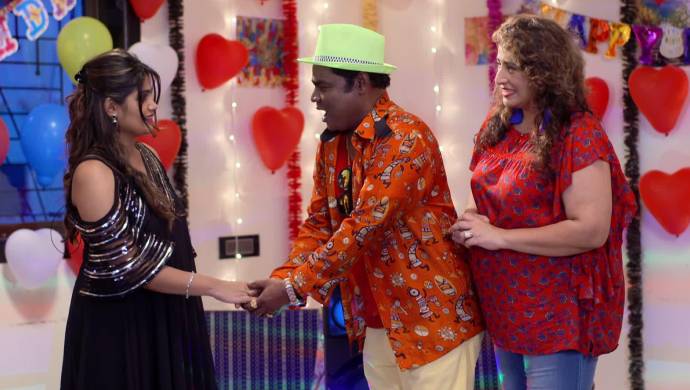 In the recent episode of Mazhya Navryachi Bayko, Shanaya is missing Gurunath after seeing Popatrao’s obsession. Mrs Sabnis asks her to forget Gurunath and focus on Popatrao. She explains that they have loot Popatrao and run away from his house. On the other hand, Gurunath, who is also thinking about Shanaya, realises it is her birthday. He decides to call Shanaya post work.

Radhika is confronted by Baba after she comes home. He tells her that he has made his will and transferred all the property in her name. Baba tells her that they no longer consider Gurunath as their son and hence he took this decision. Radhika is surprised by this gesture. Meanwhile, Saumitra is talking to Revati and Subodh about the confusion. He tells Radhika said yes for participating in the dance competition and not to his proposal. Saumitra is worried that Radhika will get a wrong impression if she hears this rumour. Then, Revati, Subodh and Saumitra decide to speak to Baba about this.

As Saumitra enters the Subhedar house, Baba is about to ask Radhika about her and Saumitra’s future. Saumitra quickly pulls Baba aside to tell him that he and Radhika aren’t dating. On the other hand, Popatrao decorates the house for Shanaya’s birthday. But, she isn’t comfortable seeing this. While she is dancing with Popatrao, Gurunath calls her but she pretends like she doesn’t know him. Mrs Sabnis forcefully asks Shanaya to hang up the call.

Radhika and Saumitra are talking about Baba’s property. She confesses that Baba shouldn’t have made the property in her name but Saumitra says Baba trusts her which is why he took this step. After their conversation, as Radhika is about to go home, she stumbles upon a rock and hurts her leg.