As Gurunath plans to bring down Radhika's happy world, Saumitra tries to cheer her up. Find out what he does, inside! 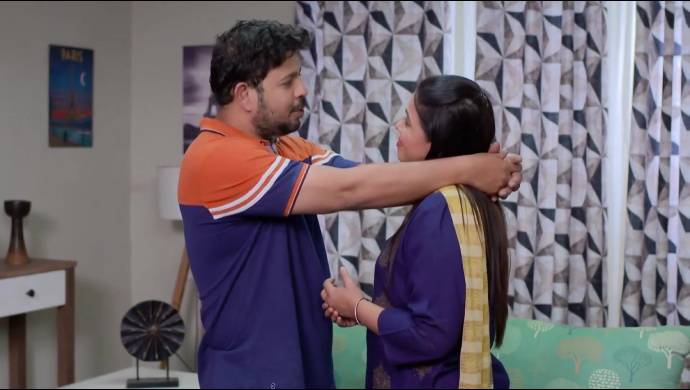 In today’s episode of the show Mazhya Navryachi Bayko, we see how Saumitra tries to irritate Radhika who is finishing the household chores. He sings Bollywood songs and tries to grab her attention. When he is unsuccessful in doing so, Saumitra unfolds the clothes that Radhika has folded and is about to keep in the racks. He tells Radhika that the clothes are not ironed and she tries to tell him that she would iron them later.

Watch the previous episode of the show here.

Meanwhile, Saumitra continues to annoy Radhika and finally pulls her towards him. He asks her to complete a fun challenge and tells her to look at him romantically for a moment. Radhika smiles and blushes for a while and then refuses as she is unable to look at Saumitra. He makes her smile and helps her de-stress! The two talk in rhymes and spend some special time together. On the other hand, Gurunath meets Maya at the restaurant and tells her about his arrangement with Mrs. Sabnis. He informs her that they have won half the battle already as Shanaya’s mother has agreed to move away with her daughter. He also adds that he would pay them off and ensure their happiness but his own lies in living with Maya. As Gurunath is saying all of this, he is unaware that Shanaya has followed him to the restaurant and is eavesdropping on his conversation. She swears on making Gurunath pay for his sins.

6 Ethnic Looks Of Tula Pahate Re’s Rajanandini That Will Appeal To You,…

What do you think will happen next? Will Radhika be able to make Gurunath accept his mistakes?