Shanaya's mom asks Shanaya to collect more information on Radhika so she knows about her. 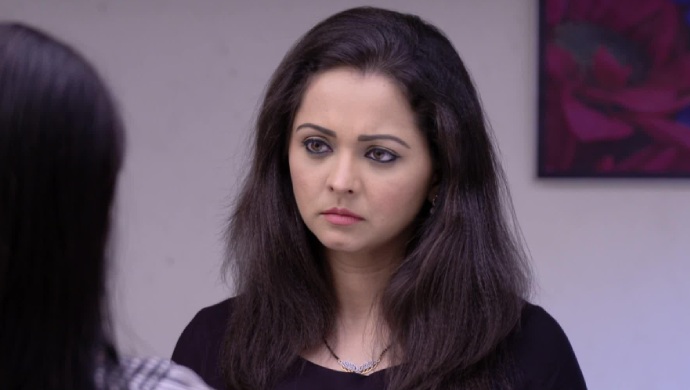 The latest episode of Mazhya Navryachi Bayko begins with Bakula (Subedar’s help) and Aai discussing Revati’s resignation from her job. Shanaya, meanwhile, intervenes this conversation by hugging Bakula. Shanaya is happy that now Bakula is back, she won’t have to do any work.

Shanaya then calls her mom, who tells Shanaya that Radhika is ready for a face-off against her. Although Shanaya is nervous as Radhika is a big entrepreneur, Shanaya’s mom assures her that she has Shanaya’s back. Meanwhile, Gurunath who overhears this conversation strictly forbids her from going for the interview against Radhika. He tells her to not get into this drama and stay away from it. But, Shanaya doesn’t listen to him and is set to enter the competition.

On the other hand, due to Revati’s resignation, tensions arise between Revati and Subodh as he blames her for leaving her job so impulsively. Revati reacts to this angrily saying that he shouldn’t be questioning her judgement. Even though the Mahajani couple tries to calm them, it doesn’t help. This conversation is interrupted by Radhika who informs Revati that she going for the interview and she has spoken to Revati’s boss to give her job back. Revati is surprised with Radhika going behind her back to talk to her boss. She feels that Radhika shouldn’t enter the interview as the channel will just make a mockery out of her. Meanwhile, Radhika says she has the truth to back her. Revati asks Radhika to think about her family and mainly Atharva, but Radhika is in no mood to change her decision and expects Revati to support it.

Meanwhile, on a call with her mom, Shanaya tells her about Gurunath’s reaction and considering backing out. But, her mom instead sends her on a new mission to collect information on Radhika. Shanaya now has to know Radhika’s likes, dislikes, best and worst personality traits. Aai is still tensed about Revati’s situation and tells Radhika about Shanaya’s decision to go for the interview. Being against it, she feels their household drama will out in the open after the interview goes live. Radhika tells that even she is attending the interview. She explains that her speaking out about Gurunath and Shanaya’s wrong behaviour will only empower other women who are ill-treated like she was at one point.

The next morning, Shanaya wakes up and sets her mind to get more information on Radhika.

Do you think Shanaya will achieve what her mom has told? Let us know in the comments below.

Can You Guess What Helped Abhindya Bhave Become A Better Actor?