In Mazhya Navryachi Bayko, Raghu tells everyone that Radhika accepted Saumitra's proposal after misinterpreting their conversation. 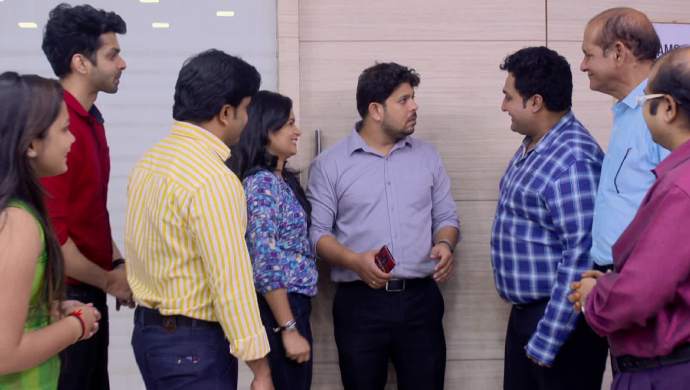 In the recent episode of Mazhya Navryachi Bayko, Anand and Shreyas are trying to persuade Saumitra to propose to Radhika again. During this conversation, Radhika enters and asks the topic of their discussion. Radhika keeps interrogating but they don’t tell anything. Finally, she asks Saumitra to meet her in the cabin. Saumitra follows Radhika while Anand tells Raghu to spy on them under the impression of getting coffee.

Shanaya and Mrs Sabnis are returning from their shopping trip. Shanaya is tired of Popatrao asking her to marry him, but Mrs Sabnis encourages her to marry as they will be rich. Shanaya objects this. Meanwhile, for her birthday, Popatrao is spending about 1 lakh rupees for the party. He tells the event management executive to arrange a dance for him and Shanaya at the party.

Radhika asks Saumitra if she should participate in the dance competition. He quickly motivates her and Radhika agrees to be a part of it. Raghu misinterprets this conversation and thinks Radhika accepted Saumitra’s proposal. Raghu announces this in front of the whole office. During this, Nana calls Anand to know about the status of Saumitra and Radhika’s relationship. Anand tells Nana that they have finally started dating. Aai is disappointed after hearing this. Meanwhile, Gurunath is spotted by an ex-colleague who is surprised to see him in a bad condition.

Mazhya Navryachi Bayko's Radhika Talks About Her Equation With Her Mother-In-Law, Watch