In tonight's episode, Saumitra explains to Atharva that he wants to become his and Radhika's best friend. 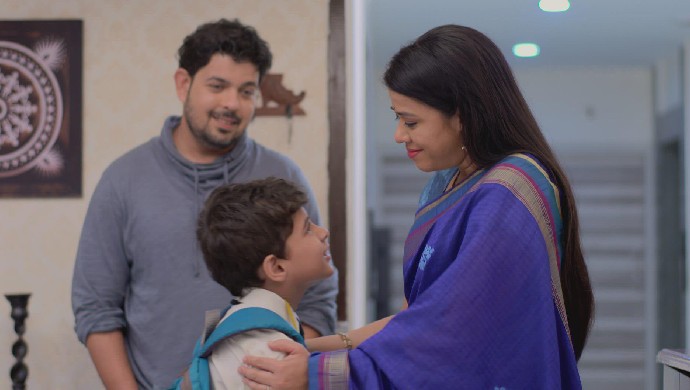 In the recent episode of Mazhya Navryachi Bayko, Mrs Sabnis finds out that Shanaya and Gurunath helped Popatrao to runaway. On the other hand, Radhika tells Saumitra that she cannot marry him because Atharva has a problem with their marriage. The latter tells her that she should not lose hope so early. Saumitra asks her to let him handle this situation his way. He promises that he will talk to Atharva and make him understand.

In tonight’s episode, Anand and Jenny assure Radhika that Saumiitra will talk to Atharva and sort the problem for sure. Meanwhile, Saumitra takes Atharva to the school of specially-abled children. He asks him to give gifts to the school children become their friends.  Atharva is happy to have so many new friends. Saumitra then tells him that he is happy because he has so many new friends, just like that he also wants to become friends with him and his mother Radhika. He clarifies that he has no intention to become his father. Later, Saumitra returns home with Atharva and the kid tells everyone that he had a lot of fun with Saumitra and now they are best friends. Seeing this, Aai and Baba feel better.

On the other hand, Shanaya is convincing Gurunath to go out for shopping. He tells her that the money they are using belongs to Popatrao and they should return it to him. The latter tells him that Popatrao has given her the money and she didn’t ask for it. She then agrees to returns the money if Gurunath finds a job, and gets a good salary. Gurunath tells her that he won’t get a new job because of work history.

Radhika calls Saumitra and thanks him for being patient with Atharva and making him understand.