In Mazhya Navryachi Bayko, Saumitra convinces Radhika that Gurunath is too smart to throw a bag having Rs 35 crores rupees in the water. 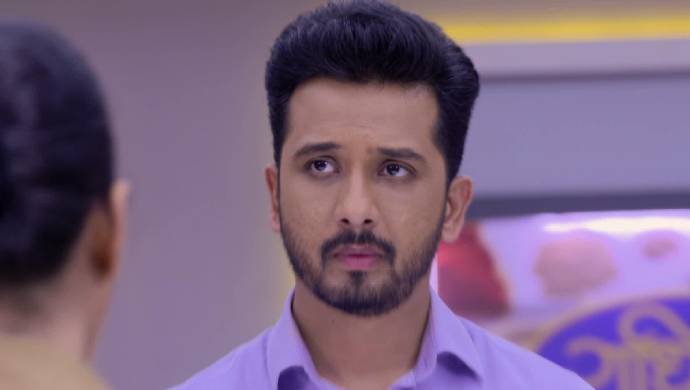 In the recent episode of Mazhya Navryachi Bayko, two old men call the cops to inform them about an unusual incident. They have seen Gurunath throw the bag in water. These men then dial up the cops and report Gurunath. Radhika, who is stressed out after the press conference, gets a call from the police saying they have found the robber. The police asks Radhika to make everyone wait as they are heading to the office. Meanwhile, Gurunath calls Kedya and tells him his plan which involves the waiter who gave Popatrao the adulterated drink.

Shanaya and Mrs Sabnis are curious about Kedya and Gurunath’s plan. They are in search of Kedya as Shanaya calls Popatrao who doesn’t answer her calls. After a couple of missed calls, Popatrao answers her calls and confirms that he is fine although a slightly dizzy. He realises he fell asleep after having the drink given by the waiter. Popatrao, then, goes to take revenge on that waiter.  At Radhika’s office, the old men have seen Radhika’s press conference which is why they decide to help her. They, along with the cops, have come to Radhika’s office for the face recognition.

Kedya bribes the waiter and asks him to tell Radhika’s name when Popatrao comes. As predicted, Popatrao beats up the waiter and asks him who was behind adulterating his drink. The waiter blames Radhika for Popatrao’s neck injury as Gurunath’s plan is successful. The old men recognise Gurunath and say so in front of everyone. Gurunath has a surprised and anxious expression on his face for being caught. Everyone starts crying and screaming at him as he is silent. Anand almost goes to beat him up. After Gurunath is taken in for investigation, Saumitra feels Gurunath is too smart to throw a bag having so much money in the river.

To enjoy latest blockbusters, check out movies streaming on ZEE5.