Will Shanaya's mom convince Radhika to come for the interview? Find out! 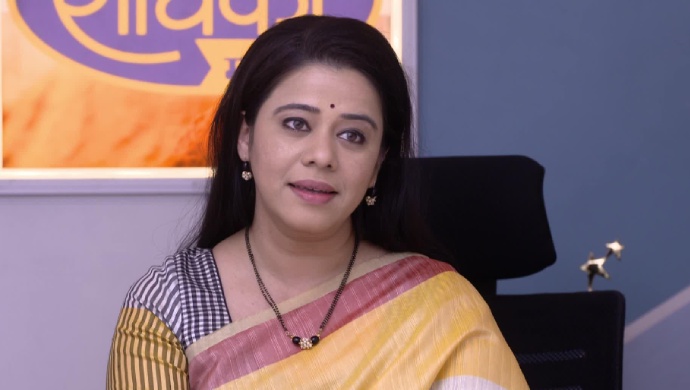 Radhika feels bad because she lied to Aai to save Gurunath in the latest episode of Mazhya Navryachi Bayko on ZEE5. Gurunath comes to Radhika to thank her, but she lashes out at him and they have an argument he defends Shanaya. Radhika, also, shames him for lying continuously to his parents. Finally, she swears this was the last time she ever helped him.

Aai and Shanaya have an argument over Shanaya not finishing chores given by Radhika. Gurunath intervenes and leaves for work. He is followed by suspicious Shanaya who wants to know Gurunath’s workplace. The Mahajani couple update Radhika about the improvement between Revati and Subodh’s relationship as seen in the last episode. They are saddened that they don’t get to see their son.

In Revati’s office, her boss wants her to convince Radhika to come face-to-face with Shanaya in an interview to grow the ratings of their show. Revati declines the offer stating that it is against the morals of her friendship with Radhika. He then asks her for resignation which Revati gladly accepts.

Revati’s boss calls Shanaya’s mom and tells her to convince Radhika to come onboard. Shanaya’s mom is left troubled. On the other hand, Radhika and her employees talk about the business where Anand and Ginni ask Radhika’s permission to leave early to go shopping for their marriage trousseau. Radhika happily grants them permission stating how happy she is for their union.

How will Shanaya’s mom convince Radhika to come for the interview? Tell us in the comments below.

Want #MondayMotivation To Work Harder? Watch B. Tech On ZEE5 Which Tells The Story Aspiring Youngsters

Who Should Play Avadhoot Gupte In His Biopic? Watch Exclusive Video To Find Out