Shanaya and her mom are thinking of the epic face-off while Gurunath is angry about Radhika using him. 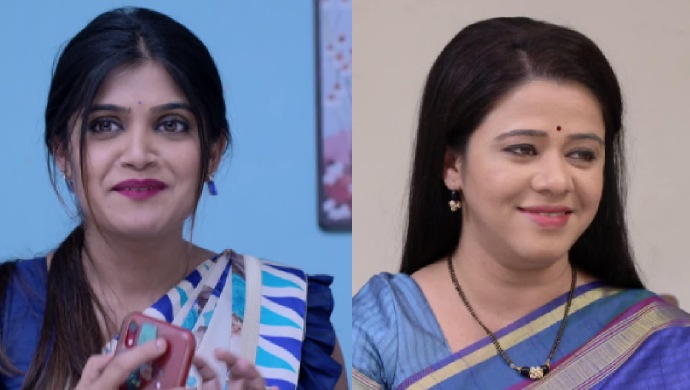 In the latest episode of Mazhya Navryachi Bayko on ZEE5, Radhika twists Gurunath’s arm to convince him to help her against Shanaya. He does so reluctantly and Radhika’s plan is successful after which she leaves for office.

In the sneak peek we see everyone at the office is surprised how Gurunath easily agreed to help. Radhika explains to them that she had blackmailed him saying that she will tell Shanaya about the truth behind his ‘real’ job. She also adds that Shanaya would not approve of him being a taxi driver. Radhika’s colleagues after hearing this laugh about it.

Meanwhile, Gurunath and Kedya discuss the incident. Gurunath is angry and still in disbelief that his once-up-a-time innocent wife, Radhika used him against Shanaya. Radhika feels that Shanaya might have seen Gurunath doing a driver’s duty and they have to just wait and watch to see how she reacts.

In the next episode, Shanaya and her mom will be seen dreaming about the legendary fight between Radhika Subedar and Shanaya Subedar. They visualise Shanaya punching Radhika and winning the duel.

We would love to know in the comments, are you Team Radhika or Team Shanaya!

If you are Team Shanaya, watch the sizzling performance of Isha Keskar in Utsav Anandacha streaming free on ZEE5.