In Mazhya Navryachi Bayko, Radhika wipes the coffee with Shanaya's saree without her knowing. 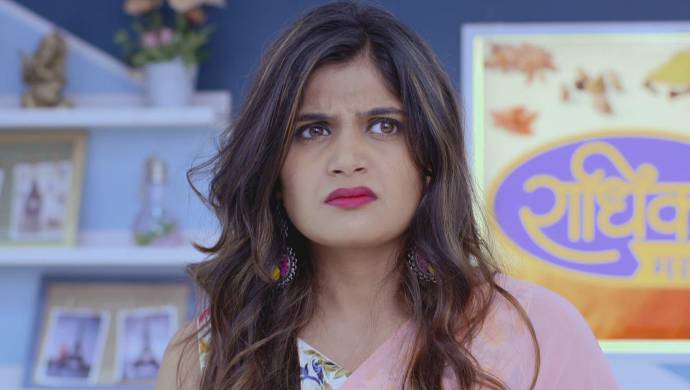 In the recent episode of Mazhya Navryachi Bayko, Radhika tells Anand and her other employees that Shanaya has taken over her cabin. Seeing Radhika’s humiliation at the hands of Shanaya, Anand wants to throw Shanaya out of the office. But, Radhika stops him by saying if Shanaya goes away, she will cancel the contract with Radhika Masale. Anand and Shreyas are still not convinced and are furious with Shanaya’s unprofessional behaviour, but Radhika still makes futile efforts in calming them down. Finally, Radhika says that they will have to smartly attack Shanaya.

Shanaya, on the other hand, is dreaming about becoming the head of Radhika’s company and turning it in her name. She calls Gurunath who pretentiously warns her to be alert from Radhika and her employees, but Shanaya doesn’t care. Shanaya tauntingly tells Gurunath that she trumped over Radhika, something that Gurunath couldn’t do. While talking to Gurunath, Shanaya falls off the chair and is laughed at by all her employees.

Shanaya angrily asks Raghu to repair the chair but Anand and Shreyas insult her. Seeing the situation, Shanaya promises to take revenge. Meanwhile, after coming out of Shanaya’s cabin, she orders Jenny to get coffee for her. Seeing this, Jenny and others get furious. In the cabin, Shanaya drops coffee from Jenny’s hand and orders her to wipe it. Radhika enters and wipes the table with Shanaya’s saree without her knowing. Then, Radhika says once her work is over, she will deal with Shanaya. Meanwhile, Gurunath and Kedya happy to see Shanaya’s progress in Radhika’s company. They are supporting Shanaya’s efforts in humiliating Radhika.

Inspired By Mumbai Pune Mumbai, Do These Things In Pune While You Are There

Hutatma On ZEE5 Will Show You How Maharashtra Came Into Existence. Watch Now!