In Mazhya Navryachi Bayko, Gurunath gets angry thinking Shanaya is having an affair with Popatrao and fights with him. 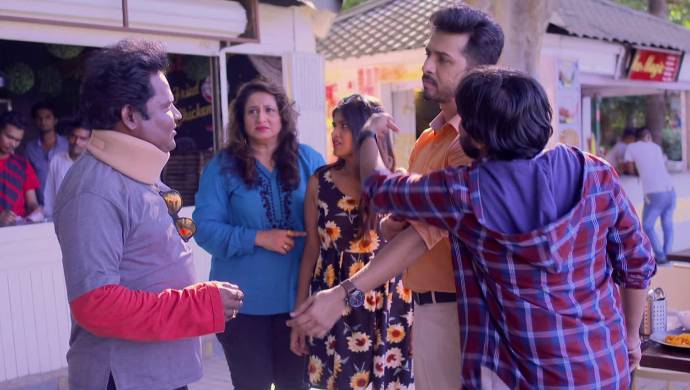 In today’s episode of Mazhya Navryachi Bayko, Shanaya and Mrs Sabnis have gone to meet Popatrao. Kedya calls Gurunath to tell him about Shanaya’s meeting with Popatrao. Gurunath is told by Mahadik that people love Radhika’s honesty and modesty to accept mistakes. Mahadik then warns Gurunath that if he is involved in the heist directly or indirectly, Gurunath won’t be able to save himself. At a restaurant, Kedya and Gurunath meet Shanaya and Mrs Sabnis who are having lunch with Popatrao.

Gurunath goes to fight with Popatrao and breaks the cast around his neck. He shames Shanaya for having an affair with Popatrao while being married to him. Shanaya says he did the same with her while being married to Radhika. Then, Shanaya walks out along with Popatrao and Mrs Sabnis. Popatrao decides to take revenge on Gurunath for humiliating him. Shanaya tells that she is Gurunath’s second wife. They can’t have a happily ever after until he divorces Radhika. Popatrao decides to make Gurunath divorce Shanaya instead.

Radhika comes home and tells her family that they have two days to find the robber. She also wants to have a press conference to put forward her side but this could be risky as the press can tarnish her image even further. Although Revati and Subodh aren’t in support of this, Baba, Aai and Mahajani Kaka give a thumbs up to her idea. Meanwhile, Gurunath gets drunk with Kedya and starts cursing his own situation. He starts crying and talking about how everyone has left him. Kedya suggests that they take the whole money and run away. During this, Gurunath says tomorrow he is going to implicate some else for his crimes.

Tula Pahate Re Promo: Has Isha Realised That She's A Reincarnation Of Rajanandini?

Mazhya Navryachi Bayko 21 May 2019 Preview: Gurunath Has A Proposal For Radhika