A journalist gets the news of Gurunath's suicide attempt. 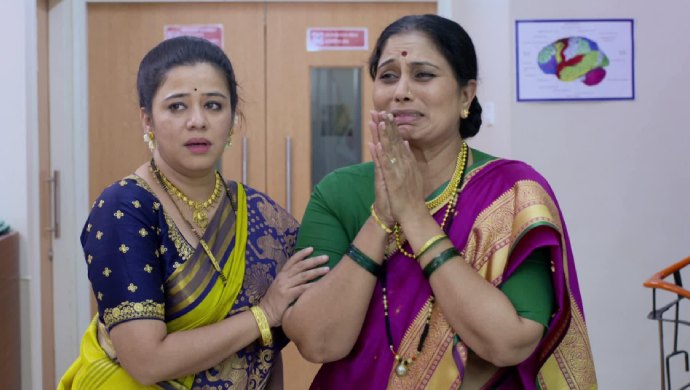 Anand and Jenny’s engagement goes on happily in Mazhya Navryachi Bayko streaming on ZEE5. Once the cake cutting ceremony is done, they all play garba. On the other hand at home, after having dreams about his family members, Gurunath finally sees himself. The dream-like figure tells the real Gurunath all the mistakes he has done. He is reminded of his leaving Radhika for Shanaya, Radhika’s struggles for him and all the times he has been mean to his loved ones. He is told that Shanaya has never given him this satisfaction, so Gurunath should stop expecting her to return. Gurunath feels victimised.

At Jenny and Anand’s engagement, the groom’s father asks about Gurunath’s absence in front of everyone. This creates an awkward situation after Anand replies he wasn’t invited. Radhika and Aai intervene and say Gurunath is no longer the same person that he once was. Then, Saumitra breaks the silence by persuading all of them to click a group selfie. After the ceremony is over, Saumitra drops Radhika and Aai. She calls him home for coffee. On reaching home, they see fallen and broken things. They rush to the bedroom and spot an unconscious Gurunath who has overdosed on Aai’s pills. Everyone is frantic as Saumitra calls Subodh and Revati. They take Gurunath to the hospital.

At Shanaya’s place, Kedya tells Shanaya about Gurunath’s loneliness. As Shanaya gets up to go, Mrs Sabnis stops her constantly. Meanwhile, Aai is crying at the hospital. Finally, Gurunath is out of danger. The doctors ask them to inform the cops. On the other hand, a journalist visiting the hospital finds out about Radhika’s husband trying to commit suicide. He overhears this conversation and writes down this exclusive headline.

Will Radhika’s image be tarnished because of Gurunath? Let us know your thoughts in the comments below.

Meanwhile, if you have loved watching this show, check out Abhijeet Khandkekar’s opinion about women in an exclusive interview streaming on ZEE5.