In Mazhya Navryachi Bayko, Saumitra, with everyone’s blessings, is excited to propose to Radhika! 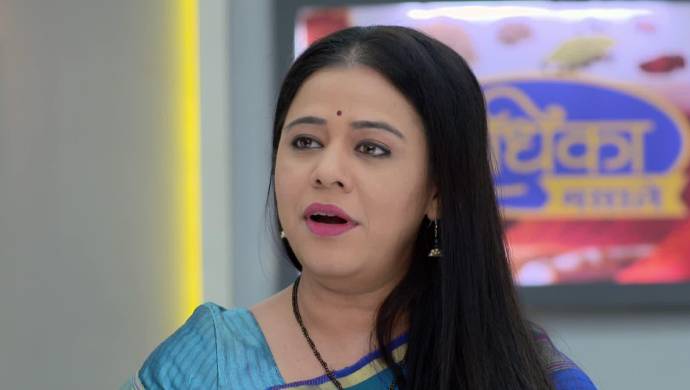 In the recent episode of Mazhya Navryachi Bayko, Radhika calls at home after her discussion with Revati. She asks Aai if they can celebrate Saumitra’s birthday at their house. Aai is hesitant to say yes, but Baba happily gives his permission. After the conversation ends, Baba tells Aai to keep her thoughts about Gurunath aside and indulge in Saumitra’s birthday celebration.

Anand happily calls Saumitra to inform him that Radhika is planning a surprise party. Realising that he shouldn’t have told these plans to Saumitra, Anand tells him to pretend in front of Radhika that he doesn’t know anything. Anand also motivates Saumitra to propose to Radhika at this party.

Revati talks about this surprise party in front Subodh who updates her Saumitra is planning to propose to Radhika. Meanwhile, Shanaya and Mrs Sabnis are happy to spend Popatrao’s money on their luxuries. They have lied to Popatrao about the saree-draping class and have gone to enjoy on their own. During this, Popatrao’s man records their video as proof to show him.

Nana calls Baba to talk about his meeting with Gurunath. Baba is told about the dire condition Gurunath was in. They decide to not talk about this to Radhika and Aai. Meanwhile, Radhika calls Saumitra to invite him to her house without telling him about the surprise party.

Guruji shows the video of Shanaya and Mrs Sabnis to Popatrao, and Mrs Sabnis overhears this. The mother-daughter duo makes up lies to convince Popatrao that Guruji is wrong. Meanwhile, Gurunath’s palms are bleeding after pulling the heavy-weight pulley.