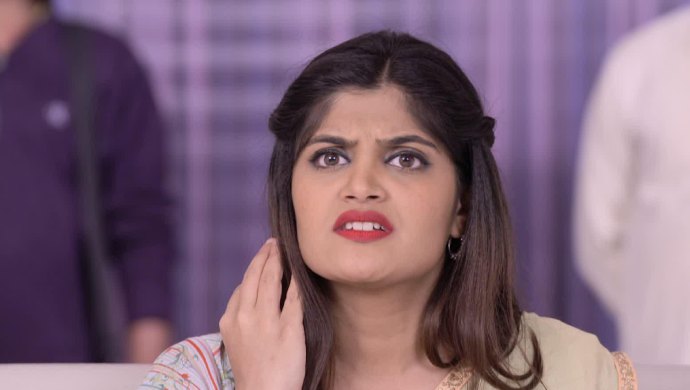 The latest episode of Mazhya Navryachi Bayko begins with Revati introducing Radhika to the audience. She gives them a brief about Radhika’s business and her struggles to reach where she is now. Before she can introduce Shanaya, the latter interrupts her and does her own introduction. Revati asks Shanaya to speak only when spoken to and begins the interview. She asks Radhika if Gurunath left her because she is simple? She replies saying she believes simplicity and big dreams. In fact, Gurunath fell in love with her simple attitude once upon a time.

Revati, then, asks Shanaya why Gurunath is so interested in her. To this, Shanaya quickly replies that she and Gurunath are of the same level, that’s why Gurunath started liking her. She says that she is better than ‘Good For Nothing’ (Meaning: Radhika) anytime. Interrupting her, Revati instructs her to call her Radhika. Shanaya agrees and proceeds on to say she is more beautiful, fashionable and more educated than Radhika as prompted by Gurunath on the microphone.  Hearing this, Radhika quizzes her a mathematical question. Shanaya fumbles and before Gurunath can tell her the answer, Radhika answers it correctly and earns a round of applause.

Further, Revati asks Radhika why isn’t she divorcing Gurunath who is waiting to be free? Radhika opens up saying she has put in efforts nourishing this family and help it grow. She has spent her life loving Gurunath and Atharva. Suddenly, she can’t let it all go so easily now that Gurunath’s feelings towards her have changed. She asks, why should women have to be the ones to suffer? This is followed up by another question by Revati to Radhika asking if she is doing all this to teach Gurnath and Shanaya a lesson? Radhika says she can’t accept Shanaya so casually who is responsible for breaking their house. Gurunath prompts Shanaya to ask Radhika if she talking about culture and family, then why has she got her savat, Shanaya, to their house? Radhika says since Gurunath is being selfish, she can’t think like him. This is her last try at getting him close to Atharva. If Shanaya becomes a good housemaker then she will leave Gurunath.

Revati challenges her by questioning if she is going to divorce Gurunath anyway, then what’s the point of trying to do all this? She replies when you spend time nourishing your family, you only let go of it when you know it’s in good hands. This answer wins another round of applaud. Shanaya disagrees to this point. She thinks not all the girls have to be housemakers and she doesn’t want to be one. Prompted by Gurunath, she says both husband and wife can together do the household chores while the wife can wear what she chooses to. Shanaya humiliates Radhika says because of this conservative thinking Gurunath left Radhika and came to her. Radhika challenges saying when a woman cooks she nourishes the entire household, you can’t get the same when you have an outsider to cook. Shanaya asks then why isn’t independence there? Radhika feels husband and wife are bonded to each other, they are answerable to each other. A housemaker can also be a strong independent woman who wants to be an entrepreneur.

Finally, Radhika asks why couldn’t Shanaya do what she has done? Answering this herself, she says Shanaya has wrong motives. She doubts Shanaya’s love for Gurunath. Then, Radhika quizzes her, if she gives her the Rs 300 hundred crore property, will Shanaya leave Gurunath? Shanaya takes her time to think as her mom wants her to say ‘Yes’ while Gurunath wants her to say ‘No’. On the other hand, Anand Bhauji catches Gurunath talking on a microphone. He asks Gurunath is he is talking on the phone, Gurunath says, ‘Yes’. Hearing this, Shanaya thinks Gurunath is prompting her the answer as she says ‘Yes’ to Radhika’s question. Everyone is shocked including Revati. Then, Shanaya retracts saying she doesn’t know and gets caught with a microphone on live TV. Revati shames Gurunath and Shanaya as Radhika wins.

Do you stand by the results of the Mahasangram? Let us know your thoughts in the comments below.

Awaken Your Inner Patriot While Watching Veergati Exclusively On ZEE5