In Mazhya Navryachi Bayko, Radhika wins a special award and thanks Saumitra for supporting her. 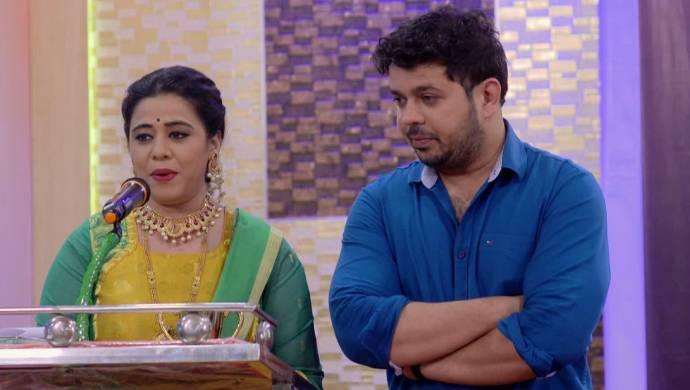 In the recent episode of Mazhya Navryachi Bayko, as Radhika falls on the stage, Saumitra gives her hand and helps her stand up. She says she can’t do it but Saumitra makes her continue her performance. She gets a round of applause after finishing her performance. This scene is witnessed by Gurunath who feels uncomfortable seeing this. Finally, when the winners are announced Revati gets the third prize.

Revati thanks Subodh, Radhika and everyone from Gulmohar society who have always supported her. When the winner is going to be announced, Radhika apologises to Saumitra for not dancing up to his expectations. He gives her hope by saying the first ranker is yet to be declared. But, Radhika’s name isn’t called and she gets upset.

The judge of the competition is asked to make a speech. During this speech, she announces Radhika’s name to receive the trophy. She is awarded for giving her performance even when her leg was injured. Radhika gives a thank-you speech. She thanks all the loved ones and especially Saumitra for motivating her to participate in the dance competition. After hearing Saumitra’s name, the judge then asks Radhika to call her ‘husband’. But Radhika corrects her saying Saumitra is her friend. He goes on stage feeling very awkward and receives the trophy given to him by Radhika. Gurunath watches this from afar.