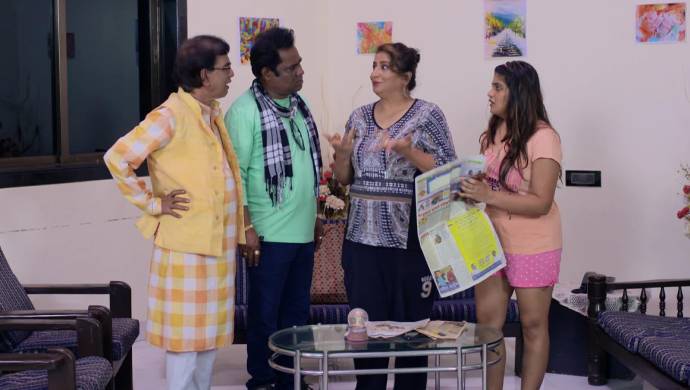 In the recent episode of Mazhya Navryachi Bayko, Radhika and Revati are discussing the gifts that they should give Saumitra. Revati wants Radhika to gift Saumitra something special so she suggests the latter should call him directly and ask what he wants. Radhika quickly calls Saumitra but he keeps joking about the topic. Finally, he tells her that he will ask her what he wants when the time is right. After the phone call is over, Revati suggests Radhika that they should host Saumitra’s birthday party at her house.

Popatrao gets an expensive saree for Shanaya as Mrs Sabnis hints him that he should have gotten a gift for her, too. He asks Mrs Sabnis to teach Shanaya how to drape a saree, but she doesn’t know. Popatrao is very disappointed and Mrs Sabnis tells him that they should send Shanaya for a saree draping class. For this class, she asks money from Popatrao and he gives her Rs 80000.

Munnaseth gives Gurunath a job to drag the pulley. He realises that once upon a time he used to be rich and now he has to do a poor man’s work. He is seen doing this laborious work by Nana and Nani. Nana goes to talk to him out of pity. He tells Gurunath that he did injustice to his family and ruined his life. Finally, he asks Gurunath to never return back in Radhika’s life.