Gurunath is angry with Shanaya for lying to him. Meanwhile, Mrs Sabnis wants to become rich through Popatrao's estate. 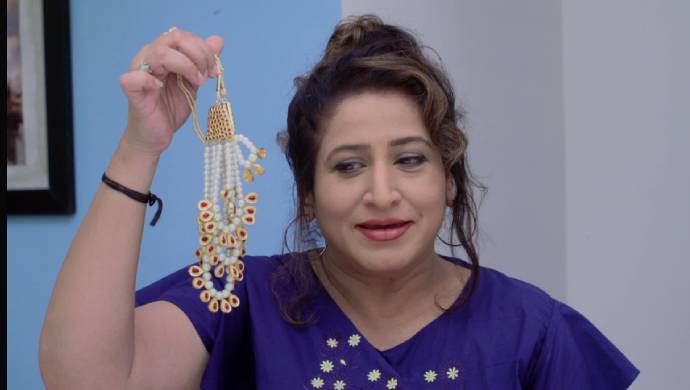 In the latest episode of Mazhya Navryachi Bayko, Saumitra wants Radhika to wait for him before getting married to anyone in the next birth. She thanks him and wonders how can anyone love her so much. He says he has confirmed going to America. Meanwhile, Mrs Sabnis and Kedya are trying to throw Gurunath out of the house.

Shanaya enters her house as Gurunath is sitting there. He inquires if she had gone Sakargaon but she lies. Gurunath catches her lie and shouts at them. He furiously says that he will never ask them for help. Meanwhile, Saumitra meets Anand and Jenny for an ice cream. Saumitra expresses his gratitude for patching his and Radhika’s friendship. Over =dessert, he breaks to Anand and Jenny that he is moving away to the US.

At the Subhedar house, Atharva is missing Radhika as she enters home. She gives him the gifts she has got for him. Then, Radhika informs Aai and Baba the importance of helping villages and providing education. She tells her in-laws that she is going to adopt Sakargaon and encourage their growth. Aai and Baba are proud of her work. On the other hand, Shanaya is tensed that Gurunath isn’t talking to her. She tells Mrs Sabnis her account of the Sakargaon trip. She reveals Popatrao’s gift for her. Mrs Sabnis wants to explore Popatrao’s opportunity to become rich.

Meanwhile, Aai understands Gurunath’s plan to tarnish Radhika’s image by linking her to Saumitra. She shouts at him.

You Might Dial Up Your Hair Stylist Seeing Abhidnya Bhave's Hairdo