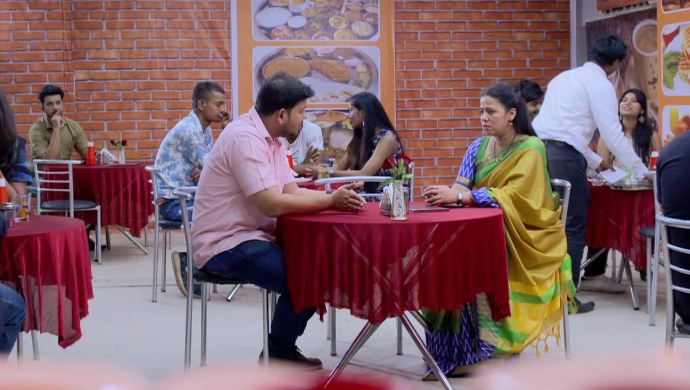 In Mazhya Navryachi Bayko‘s last episode we saw Gurunath frantically looking for Shanaya who is at Sakargaon. She had instructed Mrs Sabnis and Kedya to not reveal her location to Gurunath. This drives him mad as he is looking for her. Meanwhile, in the village, she is getting attention from Popatrao who is infatuated with her.

In today’s episode, Gurunath is frustrated as he cannot get Shanaya’s location. He asks Kedya who lies to him that Shanaya has gone to Pune. Gurunath decides to go and stay at Kedya’s place. At Sakargaon, Popatrao is flirting with Shanaya by gifting her stuff. During their conversation, he holds her hand and proposes to her. But, Shanaya confesses that she is already married. He starts convincing her as Radhika intervenes.

Radhika slaps and humiliates him. She and Popatrao start screaming at each other. He leaves and promises to avenge this humiliation. Meanwhile, Mrs Sabnis and Kedya are wondering about Shanaya as Gurunath drops by their place. He says he will stay there until she comes back home. Mrs Sabnis and Kedya are worried and they try to push him out of the house. But, their attempts fail.

Radhika and Saumitra along with Shanaya are leaving Sakargaon. Popatrao sees them leave but promises that he will bring Shanaya back. At home, Kedya and Mrs Sabnis are tensed as Gurunath overhears them. Amidst this, Shanaya calls Mrs Sabnis who tells her to get down from Radhika’s car and come home from a rickshaw.

In Shanaya’s absence, Radhika and Saumitra get along. As he drops her, there are awkward moments in between them. But, they part on a happy note. Finally, he tells Radhika that in the next birth he will love her still the same. She is surprised seeing his love for her.

For more entertainment, check out Kanala Khada streaming on ZEE5.