In Mazhya Navryachi Bayko, Anand encourages Saumitra to propose to Radhika on his birthday. 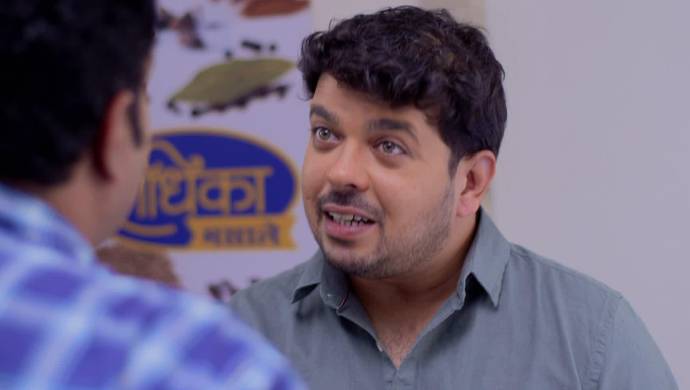 In the recent episode of Mazhya Navryachi Bayko, Radhika and Revati are furious at Gurunath for meeting Atharva secretly. Radhika is worried that Gurunath will try to meet Atharva again and poison his mind against her. That is why, Revati wants Radhika to submit Gurunath to the cops, but she refuses to do so. Meanwhile, Popatrao’s stomach is upset because of Shanaya’s homemade food. Even after this, he loves Shanaya and dreams of getting married to her.

Shanaya and Mrs Sabnis enter Popatrao’s room and see him in a bad condition. As they get worried, Popatrao tells Mrs Sabnis to teach Shanaya how to cook. Mrs Sabnis tells him that to learn cooking they have to go for a cookery class and for that he needs to give them money. Popatrao quickly gives them the required amount.

Saumitra, Jenny and Anand surprise Radhika by hiding in her cabin. Saumitra says he isn’t feeling well and Radhika gets very anxious. But, Saumitra starts laughing and tells her that he is feeling weird because it’s his birthday this month. When Saumitra and Anand are alone together, the latter is upset with him for not confessing his feelings to Radhika. Anand wants Saumitra to propose to Radhika on his birthday. On the other hand, at the office, Radhika gives a successful presentation to her clients.

Mrs Sabnis tells Shanaya that they are going to have fun from Popatrao’s money that he has given for the cookery class.

Despite Being Onscreen Rivals, These 5 Pics Prove Anjali-Nandita Are Besties In Real Life