In tonight's episode, Mahadik and Rajwade come to the office and tell Radhika to stop defaming them or else she will have to pay the price for it. 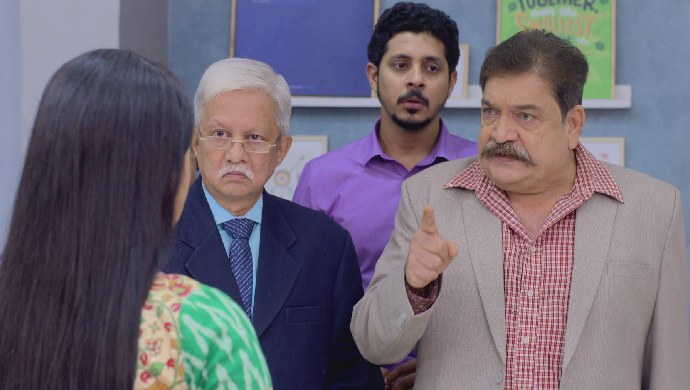 In the recent episode of Mazhya Navryachi Bayko, Saumitra goes to Anand and Jenny’s place and tells them that Radhika has agreed to marry him. Anand gets excited and says that they need to start preparing for the marriage. Just then, Saumitra interrupts him and says that he is yet to get permission from his parents. Mrs Sabnis and Shanaya go for shopping and while returning home, they see Popatrao’s men searching for them. They immediately run to hide. Radhika gets a call from the unknown caller and this time he says that Saumitra’s life is in danger.

In tonight’s episode, Mrs Sabnis and Shanaya come home and ask Gurunath to close the door immediately. Upon asking the reason they tell him that Popatrao’s men were following them. To this, Gurunath asks where Popatrao is and return them the money so that everything is sorted. But Mrs Sabnis refuses to do so.

Meanwhile, Radhika panics after getting a threatening call from an unknown caller. She calls Saumitra to ensure if he is safe. But the latter sees a tempo coming towards him and disconnects the call.

Radhika tells Saumitra about the unknown caller and says that she is afraid that this person might be dangerous to other family members as well.  On the other hand, Gurunath tells Mrs Sabnis that he is going out for some important work and he will be back soon. When she asks him where is he going, he refuses to answer.

Shanaya And Gurunath's Avatars Will Make You Forget The English Royalty