In Mazhya Navryachi Bayko, Gurunath's suspicious behaviour gets him grilled by the cops. 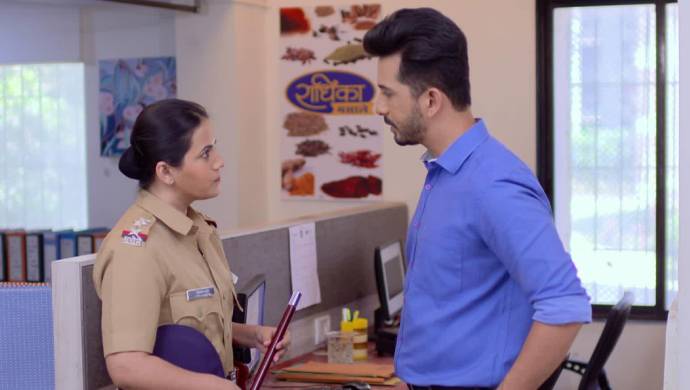 In the recent episode of Mazhya Navryachi Bayko, the people, from whom Kedya and Shanaya have taken a loan, come back to ask for their money. Shanaya tells them they have a lot of cash hinting at the Radhika’s stolen money. Mrs Sabnis and Kedya try to stop her but she keeps talking. As this fiasco goes on, Popatrao enters and Shanaya narrates the whole incident to him. These people start asking for the indebted amount from Popatrao. He repays Shanaya’s bills. Kedya is disgusted by the way Shanaya is using Popatrao despite being married to Gurunath.

At the office, everyone is seeing the viral messages that are being spread against Radhika. Everyone at the office is baffled as the situation is gettting out of control. Gurunath can’t stop smiling at this. Amidst this, viral news is being played on all the news channels which say the farmers’ organisation could take a step against Radhika and pull her in the court. Meanwhile, at the Subhedar house, Aai, Baba along with everyone else think that this a ploy against Radhika to sabotage her image. They want to desperately find out the person behind this. Aai feels her daughter-in-law has been a nice person who cares for everyone which is why people have grown jealous of her success. Baba emphasizes that Gurunath is behind this robbery. Mahajani Kaka says since Gurunath has done so many bad things in the past that no one can trust him now.

The police are agitated because of that news that is leaked against Radhika. Anand points out the first the news was leaked on social media after being picked up by the news channels. The police feel that an inside person has spread this news. During this session, Gurunath gets a call from Kedya informing him about Popatrao’s update there. He tells how close Popatrao is to Shanaya and they might be romantically involved. This conversation is overheard by the police as they start suspecting Gurunath.