In the recent episode, after meeting Saumitra, Radhika gets a threatening call from an unknown person. 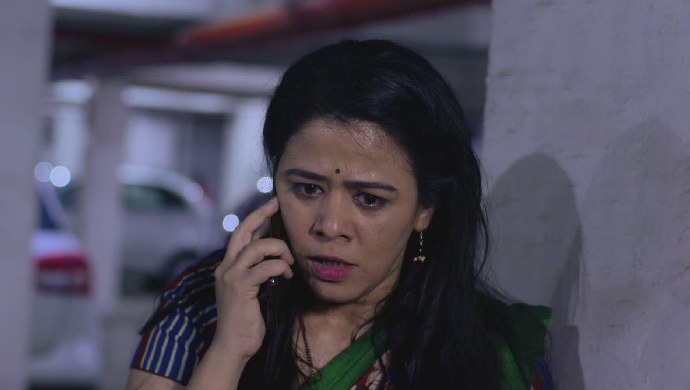 In the previous episode of Mazhya Navryachi Bayko, Radhika calls Saumitra and tells him that she has taken her decision and she wants to tell it to him personally. When Aai asks her about the decision, she tells her that she is convinced. Aai tells this good news to the neighbours and Baba. Later that day, Baba comes home and tells Radhika that she has taken the right decision of saying yes. Mahadik and Rajwade try to incite Gurunath about Radhika and ask him to join them. But Gurunath refuses to do so.

In the latest episode, Gurunath returns home and tells Mrs Sabnis and Shanaya that he got late because he met Mahadik and Rajwade. They asked him to join them in fighting against Radhika and her company.

Meanwhile, Radhika meets Saumitra in a restaurant. She asks him why does he like her. The latter says that he was in love with her from their college days but when he learned about her marriage with Gurunath, he decided to go to the US and settle there. A few years later when he returned, he came to know through Anand that Radhika has become a businesswoman now and runs her own company. He then decided to meet her.

Later, Radhika tells him that Gurunath never valued her emotions but when Saumitra came into her life, she realised how does it feel to be loved. She tells him that she has decided to value his love. She then tells him that she also likes him and agrees to marry him. Hearing this, Saumitra gets excited which draws everyone’s attention.

After dropping Saumitra till his car, Radhika is walking towards her car in the car parking. Just then, a car comes towards her and stops in front of her. The driver accelerates in front of Radhika and it seems that he wants to harm her. She immediately starts running and the car follows her. Radhika hides near a pillar and a few moments later she gets a call from an unknown person calls and he threatens her.

Watch Bombers A Grand Multi-Starrer Sports Drama Only On ZEE5

Mazhya Navryachi Bayko 16 August 2019 Preview: Will Radhika Be Able To Save Saumitra?