In tonight's episode, Radhika tells Aai that she is convinced and she wants to begin life with Saumitra. 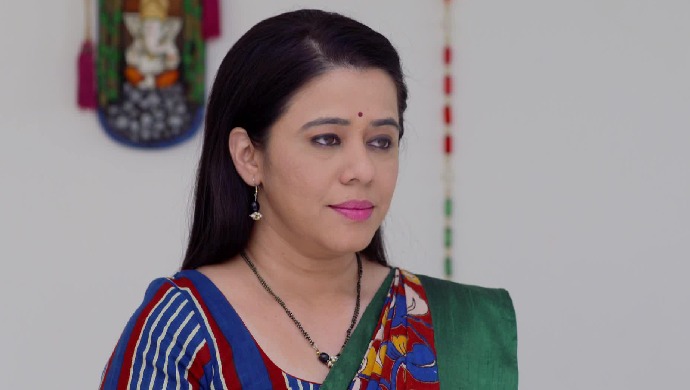 In the recent episode of Mazhya Navryachi Bayko, Radhika calls Saumitra and tells him that she has taken a decision. She asks him to come home the next day because she wants to announce her decision before everyone. Next day, Saumitra comes home and sees that everyone has already gathered. First, Radhika apologises to him and tells him that she needs some more time to think about his proposal.

In tonight’s episode, everyone is curious about Radhika’s decision. Just then, Anna tells everyone to be patient and give some to Radhika to think as her future depends on this decision. Meanwhile, Radhika calls Saumitra and tells him that she has taken her decision and wants to tell it to him personally. A few moments later, Aai comes there and asks Radhika about her decision. The latter says that she is convinced.

Later that day, Mrs Sabnis tells Gurunath to bring grocery from the market. There he meets Rajwade and Mahadik. They try to get him on their side. But Gurunath refuses to do so. He tells them that whatever they did was wrong and he doesn’t want to get involved in it.

Aai tells the good news to Baba and other neighbours and all of them are happy with Radhika’s decision. In the evening, Baba comes home to meet Radhika. He tells her that she has taken the right decision and wishes her good luck for the future. On the other hand, Anand tries to calm down Saumitra but he is still nervous about Radhika’s decision.

Are You A Fan Of Bhau Kadam? Then You Must Watch Nashibvan