In Mazhya Navryachi Bayko, the people of Gulmohar society decide to contribute money for Radhika. 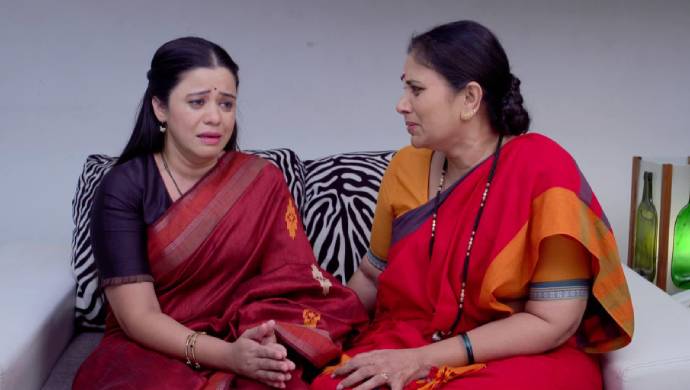 In Mazhya Navryachi Bayko’s recent episode, Baba calls out Gurunath and accuses him of robbing Radhika’s money. He reminds everyone of the scene created by Gurunath at Anand and Jenny’s wedding. Gurunath had hinted of stealing money during this function while pretending to be drunk. At that point, no one took him seriously. Baba retells this incident and makes everyone suspect Gurunath. Baba then slaps Gurunath as he pretends to be innocent.

Gurunath pulls Radhika in the middle, asking her to defend him. But, she says he hasn’t done anything worth redeeming for her to take his side. Meanwhile, Shanaya and Mrs Sabnis are shouted by Kedya. He tells them if they would have taken this bag outside, police would have caught them. Calling them senseless, Kedya informs them that Gurunath is not doing this for the money, he wants her whole property.

Panwalkar Sir is still blaming himself for the robbery. As they all are discussing the incident, Saumitra asks whether they believe Gurunath has stolen the money. Anand believes so, but no one has a legit proof that he has done it. During the marriage, Mahajani Kaka saw Gurunath vomiting while Raghu was there with him. Saumitra is worried about Radhika as he promises to take care of her.

The people of Gulmohar society decide to help Radhika financially. Subodh and Revati have to break their FDs while Mahajani Kaka decides to loan some amount from his PF. Meanwhile, Radhika is still too shocked as she can’t get over this incident. Baba tells Radhika that they will collect the money and give it to the farmers. Radhika replies saying that they can return the money but the trust once lost is gone forever. She says she has gone to this village and seen the conditions that these farmers live in. There is no certainty of flourishing fields, they only go on with hope by their side. Radhika says she has to find land the papers that farmers have given her.

For more entertainment, check out Liftman streaming free on ZEE5.