Shanaya's friend comes to know that their cab driver is actually Gurunath. 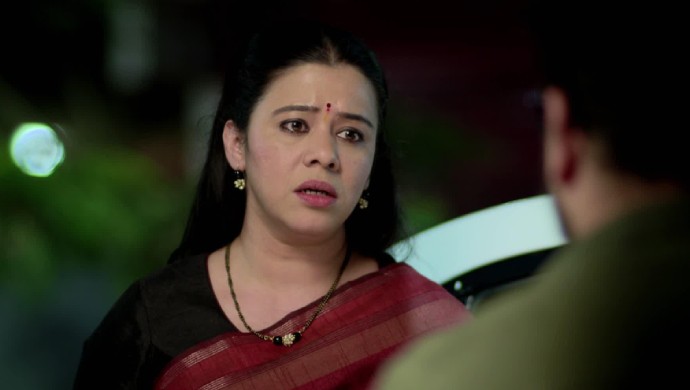 Gurunath continues giving a speech about Radhika at the ceremony held in her honour in Mazhya Navryachi Bayko. He sarcastically compliments her while telling the public that she is dominating and stubborn.  Radhika and Saumitra helplessly stare at him. Meanwhile, at the office, Gurunath’s boss and the client whose money Gurunath has to return wait for him to come.

Shanaya’s mom, Mrs Sabnis, is shopping online from the money her daughter stole from Gurunath. Kedya comes and starts shouting at her for doing this. Although he supports Gurunath, he wants the money to pay off his debts. While talking to Mrs Sabnis, Kedya tells her that it was Gurunath’s client’s money. She gets a hint that Kedya is still talking to Gurunath, so Mrs Sabnis threatens to throw him out of his own house if he continues with his friendship. Meanwhile, Shanaya is partying with her friends.

Gurunath reaches office and returns the money to his client who motivates Gurunath to establish himself again. The client leaves a card with him for a job opening in the future. Shanaya’s friends thank her for giving them a lavish party. They can’t wait to meet Gurunath and think she is lucky. After partying, they call for a cab. Co-incidentally, the driver turns out to be Gurunath who realises that the customers are Shanaya and her friends. He gets awkward and tries to hide his face as Shanaya doesn’t know the truth about his ‘real’ job. Meanwhile, Radhika is still upset that Gurunath spoke badly about her in public. She confesses this to Saumitra who suggests to her that she shouldn’t have given the money to him. He thinks she and Atharva should think about their life seriously and move on from Gurunath. Saumitra says that he and Radhika were college friends and they found each other again, it means something. Mrs Sabnis is ordering for pizza and burgers for herself but when Kedya asks a part of it, she refuses. She instructs Kedya to do the household chores and says she will treat him when they get Radhika’s Rs 300 crore property.

On the other hand, Shanaya’s friend who is sitting on the front seat asks her for Gurunath’s photo since they are not going to meet him anytime soon. After seeing his picture, Shanaya’s friend realises that their driver is the same man in the picture. She then asks Shanaya about Gurunath’s whereabouts. She lies to her that he is working in London. Her friend understands that it’s a lie. Meanwhile, Gurunath is awkward hearing this conversation and sensing her friend’s doubt.  On the other hand, Saumitra tries to confess his feelings for Radhika but he’s intervened by Aai’s call. She wants Radhika to come home soon as Atharva is throwing tantrums. Hearing this, Radhika asks Saumitra to drive her home some thus leaving his confession in between.

What do you think will happen in the next episode? Let us know in your thoughts in the comments below.