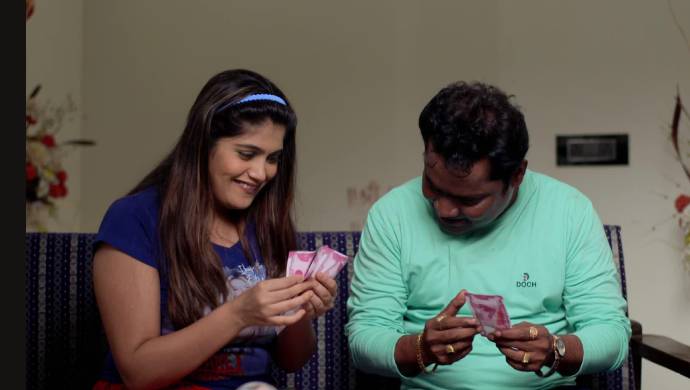 In the recent episode of Mazhya Navryachi Bayko, Radhika is beginning her life anew. She tells Aai and Baba that she is going to join dance classes. After Radhika goes, Aai tells even she wants to go for some classes like Radhika. Baba makes fun of her and starts talking about Radhika. He tells Aai that they need to find a life partner who will take care of her. Hearing this, Aai tears up and gets slightly possessive about losing Radhika.

Shanaya makes bhajji for Popatrao. According to Mrs Sabnis’ plan, the two want to impress Popatrao to stay in his good books. They hope to use his wealth for their own purposes. Shanaya promises Popatrao that she won’t meet Gurunath. Mrs Sabnis supports this and tells Shanaya that Gurunath is a loser.

Shanaya, then, asks Popatrao to give her money for shopping. As Popatrao takes out the notes, Shanaya snatches it from his hand. Meanwhile, during the dance class, Radhika remembers Gurunath’s words calling her stupid and she collapses. After gaining consciousness, she reveals this to Revati.

Shanaya is worried that Popatrao wants to get married to her soon. She decides to discuss this with Mrs Sabnis. Meanwhile, Kedya thinks Gurunath is going to kill him as he comes with a screwdriver.

Abhijeet Khandkekar Is More Talented Than You Would Have Expected! Tap Here To Find Out!

This Video Of Ratris Khel Chale 2's Shevanta, Shobha Dancing Is All Of Us On A Road Trip