In Mazhya Navryachi Bayko, we saw Saumitra reach Sakargaon to hand over a file to Radhika. They both bond with the villagers while dining with them. 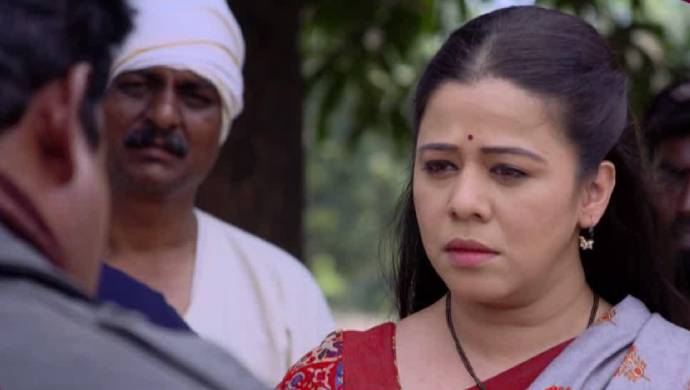 In the recent episode of Mazhya Navryachi Bayko, Kedya and Gurunath are discussing the trick to steal Radhika’s Rs 35 crores. He tells Kedya to get a duplicate bag like the bag in which the money is kept. They want to replace the bag with money with the empty bag. Meanwhile, Radhika is being treated with honour at Sakargaon.

During Radhika’s conversation with the villagers, Saumitra enters with the file. They both get awkward after coming face to face. The villagers insist him to come and sit with them, he reluctantly agrees.  Anand is worrying about Saumitra’s situation but Jenny tries to calm him down. Then, they both start discussing their preparations for their marriage, however, Anand is still sad.

Kedya is being pestered by Shanaya and her mother to spill details about Gurunath’s new plan. But, Kedya doesn’t take the bait and keeps his mouth shut. At the Subhedar house, Gurunath is apologising to Aai. He justifies saying he was just trying to get Saumitra and Radhika together. Aai screams at him saying that he should be ashamed of himself. They have a heated argument as he reveals to Aai that Saumitra has gone behind Radhika to Sakargaon. Aai is shocked and hurt to hear this.

Saumitra and Radhika are sitting for dinner with the villagers. They are eating authentic Maharashtrian food with farmers. The villagers talk about the droughts, financial issues and lack of blooming fields.