In Mazhya Navryachi Bayko, after stealing Radhika's 30 crores rupees, Gurunath now wants to take over her 300 crores worth company. 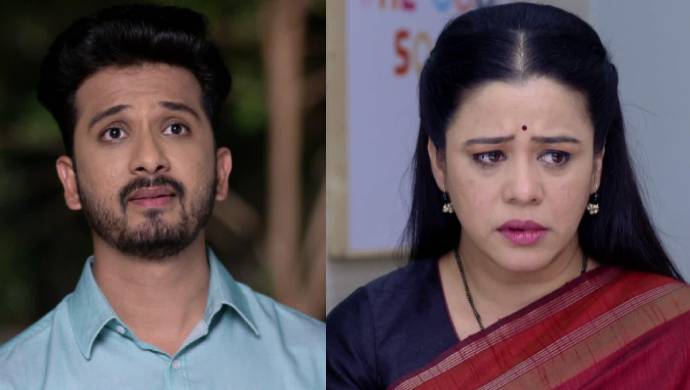 In Mazhya Navryachi Bayko’s recent episode, Shanaya and Mrs Sabnis open Kedya’s cupboard and take the bag of money. They get ready to leave for Dubai. At Radhika Masale, Aai and Radhika are refusing to go home. Finally, the people of Gulmohar society forcefully take Aai home. Meanwhile, Radhika is refusing to even eat anything. She is blaming herself as Jenny, Saumitra and Anand try to console her. She says even if they find the culprit, once the trust is lost it is completely gone.

Saumitra tells Radhika that she will win their trust back as she has always been honest. He feels nothing can beat the truth. Meanwhile, as Shanaya and Mrs Sabnis’ cab driver turns out to be Gurunath. He catches them and asks them to get down from the car as he wants to have a chat with them. He humiliates Mrs Sabnis for influencing Shanaya. He tells as her plans have always been failing so she should not use her own brain. Gurunath asks Shanaya about her plans with Popatrao. She is then told to stay away from Popatrao.

Gurunath tells them his only motive behind stealing this money was to tarnish Radhika’s image. Now, she will have to face the entire media and get her famous name smeared by the journalists. After she gets tired of answering their questions, he will talk over her Rs 300 crores worth property and become the CEO of the company yet again. Meanwhile, at home, Aai and Baba are trying to persuade Radhika to look at the bright side. They tell her at least the robber didn’t hurt her and she is safe. Aai emphasises that even when the money is lost they will collect it again. During this, Gurunath returns and he is questioned by his father. After back answering, his father starts screaming at him for showing lack of respect towards the situation. As Gurunath is indifferent towards the situation, Baba accuses him of being the culprit.

What do you think will happen in the latest episode? Let us know your thoughts in the comments below.