How does Radhika win over Shanaya this time? Read details inside! 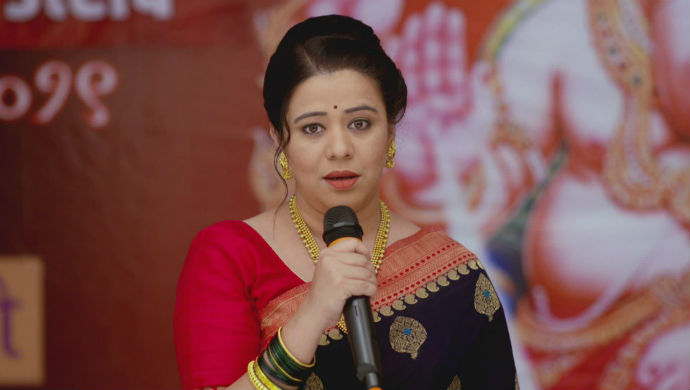 In tonight’s episode of Mazhya Navryachi Bayko, we saw Saumitra, treating Radhika to some paani puri. Meanwhile, Gurunath and Shanaya approach the cultural secretary in Gulmohar. Shanaya says that she wishes to enroll her name in the dance competition. The ladies present poke fun at Shanaya and say that drama is all she knows as Gurunath must be taking care of the house. The latter asks Shanaya to leave but she is adamant to stay and tells him to not pay heed to the women’s senseless talks. Shanaya notices that Radhika’s name isn’t in the enrollment list. She tries to convince the secretary to put it down but he asks her to mind her own business.

A little later, Shanaya says she will practice for her dance and a fed up Gurunath, leaves her alone. She then meets Atharva and mentions the dance competition. She also talks to a gang of boys in the building and pays them money to side with her against Radhika. Back home, Radhika and her family discuss all the preparations they need to complete for the cultural program in the evening. Shanaya’s topic comes up and Radhika asks her family to ignore her and let her do what she feels like. Just then. Atharva walks in and tells Radhika that Shanaya is participating in a dance competition and planning to drag Radhika into it too. But she says that there’s no way that she would let that happen. Radhika vouches to teach Shanaya a tough lesson.

Later, the cultural program begins and Shanaya comes on stage. She says she will participate in the dance competition and challenges Radhika for a dance-off. Residents from the society protest against Shanaya. She says if this is how it’s going to be, then Radhika must admit that she can’t dance and is a loser. Radhika however says that she will participate in the dance competition. But she adds that before doing so, she would like to address the audience with an important discussion.

Radhika informs the residents about why Ganpati festival is celebrated every year and how Lokmanya Tilak started it during the pre-independence era. She also notifies the youngsters in the audience about the floods that struck Maharashtra and how they can come forward to help their fellow-citizens. The gang of young boys realise their mistake and confess that they had sided with Shanaya, as she had bribed them. The episode ends with Radhika winning over Shanaya yet again, as the latter’s bitter truth is exposed.

Will Radhika participate in the dance competition after this? And what will Shanaya’s next move be? Stay tuned! Catch all the episodes of Mazhya Navryachi Bayko on ZEE5.

Why Is Asawari Upset? Watch Agga Bai Sasubai On ZEE5!